First Cold Front Of The Year

Itâs official. We had our first cold front of the year and that means we are getting ready for the winter season. The winter season has two primary targets and the first is sailfish. Once the cold fronts start rolling south, it will push the bait south which in turn is followed by predatory fish especially sailfish. Even with the passing of just the very first cold front this weekend, I heard of a few boats catching 5 to 8 sailfish on Sunday. North wind, north current and blue water up on the edge made for ideal conditions and the guys flying the flags and live baits did very well. The sailfishing will only get better as we go into November and will last all the way through April. I have my first sailfish trip this week and canât wait to dust off the kites and get the live baits out.

Another fish we associate with wintertime is the wahoo; especially hi speed trolling in the Bahamas. We have already gone to Bimini twice in the past two weeks and although we caught wahoo on each trip, it was not lock and load. Now that will change as this front just passed and more fronts will make their way south. I will tell you, I have never seen so many boats wahoo fishing in Bimini as I saw two weeks ago. The weather was flat calm and it was a weekend and there were a pile of boats out hi speed trolling. With that many boats out we decided to go deep dropping and did very well with yelloweye snappers and a few queen snappers. The next day when the boats thinned out we went wahoo fishing and caught a few wahoo south of Bimini. I have a few more wahoo trips planned for November and December. 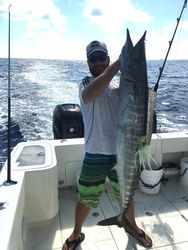 Although not just associated with winter like the sailfish and wahoo, swordfish are year round and this month through December can be exceptionally good. This past weekend on Saturday, the day before the front blew through, there were quite a few swordfish caught during the day and one boat had 4 swords that day. As long as the weather cooperates, the daytime swordfishing should remain very strong.

The majority of the trips we do in the winter are kite fishing with live baits on the edge. We will be targeting sailfish and hopefully we will have a lot more double-digit release days than last year. Besides sailfish though, the mahis tend to push their way in on the edge and we usually catch quite a few kite fishing along with kingfish, an occasional wahoo, some cobias, sharks and some tunas. The tunas are mostly blackfin tunas, but winter and spring is when we start seeing a few yellowfins and an occasional bluefin tuna.

I canât wait to get the kites out and start winter fishing. With that said I already have half of December booked and some of November. Now is the time to plan your early winter sailfish trips and take advantage of the gorgeous weather we have this time of year.