Since the last report we fished a sailfish tournament and charter fished almost everyday. The tournament was the Sailfish Challenge and this tournament can sometime be difficult to fish because it covers over 120 miles of coast from basically just north of Jupiter Inlet all the way down to just south of Triumph Reef. From the last report you saw that the sailfishing was so- so, which made it even more difficult to figure out where to fish. We opted to fish out of Hillsboro Inlet, which is where the tournament boat is based. Day one we made a left and headed north and fished from Palm Beach to Boynton. Although there was a few sailfish caught up where we were, the best bite seemed to be south in Miami. We ended up the day going one for three on sails and caught some mahis, kings etc. The next day we ran south to where the bite was the day before and although it was a far run, it was worth it. By 1pm we were 6 for 6 on sails and were in 2nd or 3rd place for the daily Calcutta. Unfortunately we didnt see any more sails that day and dropped out of the money, but we did well and were in contention for most of the day. Congrats to the top boat Jichi, which were on the fish from the start of the tournament to the very end. Some of my good friends were on this boat and I was very happy to see them take home the prize.

The very next day we went fishing again and did well catching 5 out of 7 sails that day. The rest of the week it slowed down just a bit but there were some big mahis and big bonitos to fill in the gaps between the sailfish bites. We then got another cold front in a few days and the sailfishing picked up again during the weekend. We caught 3 out 5 on a half-day on Saturday and caught 8 out 10 on Sunday on a half-day as well. So as you can see the sailfish bite has been fairly good although we still have not seen the big push of fish that we are going to see this March and April.

I have not talked much about daytime swordfishing since this time of year we really concentrate on sailfish, but yesterday we had the perfect weather (flat calm) and there were reports of some swords being caught. I had my good customer Terry on board and he agreed to give daytime swordfishing a shot. Unfortunately we never did get a swordfish bite but there were some fish caught that day from the other boats in the area. I have been fishing almost my whole life and know that especially with swordfishing you can put in your best effort and do everything right but sometimes your bait does not cross paths with a broadbill. It still hurts though especially when other people around you got bites. Not to worry though as Terry will be fishing with us in a few weeks and I will make it up to him.

We are rapidly approaching my favorite time of year, which is spring. Springtime brings the best variety with a ton of sailfish, big blackfin tunas, cobias migrating from the shallows, big kingfish and slammer mahis on the edge. I have half of April booked and half of March booked. Now is the time to book those spring trips and catch a bunch of fish! 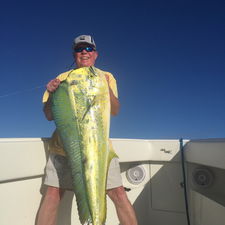