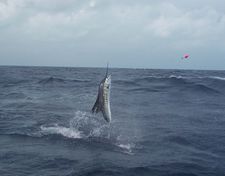 The sailfishing continues to be very good. There have been a few days where we have struggled to catch 2 or 3 sails per day, but for the most part we are catching 3 ? 6 a day. Our best day from the last report was 11 sailfish in one day. Besides the sails, there have been quite a few kingfish in shallow. There have also been some dolphin on the edge that have been from a few pounds up to about 25 pounds. From our last report I have only managed to get in two swordfish trips. The first trip we only had one fish on and we managed to break him off. Unfortunately he got wrapped in one of the other lines and that was the end of that. The second trip we caught three swords with the largest on at 240 pounds.

We also fished the Fort Lauderdale Billfish Tournament this past weekend and we ended up in 2nd place. There were over 60 of the best saifishing crews around competing and I was very happy with the results. The first day we fish down by Ocean Reef. We caught 5 out of 7 sailfish, which put us in 11th place. The next day, we decided to fish up to the north by Boynton. There was a little bit of a bite up there the day before and the current was dying at Ocean Reef. We ended up catching 7 out of 10 sails that day which gave us 12 total. That was good enough to place in 1st place and we also won the daily Calcutta. The third day we went to the same place and we had a lot of action. Unfortunately we caught 5 out of 13, which ended up still placing us in 2nd place. The lead boat, which is run by one of the best sailfisherman around, caught 9 out of 10. We definitely had enough shots to beat them but some of our fish would not cooperate. We started with a quad (4 sails on at once). Two of the quad crossed each other and both lines were cut. We did catch the remaining two. Then we had a tripleheader and the first fish we had within 20 feet of the boat and a freejumper came up and jumped on the line and broke us off. Then the other two fish got tangled and we ended up losing them as well. We re-grouped and caught 2 more out of another quad and then 1 more out of a double. It was a bit frustrating lose that many, but in all reality we were one of the very few boats that got to see them at all. We worked hard and 2nd place is extremely good, and we know that we had enough shots to win. It was a great tournament and I had a lot of help from a tremendous amount of people. I would like to thank everyone for their help and their support. All our friends were definitely cheering us on.

I don?t have any other sailfish tournaments open this year except for the World sailfish Tournament in Key West in April. If anyone is interested in that one please give me a call.

February is pretty booked up, but I do have open dates for March and April so give me a call and lets go fishing!