We have had so much fun on our trips these past two weeks. The fishing has been great and the customers even better. The daytime swordfishing has been on fire and the fishing on the edge has been quite productive for October. 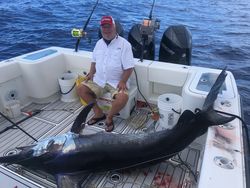 Letâs start with swordfish. We have caught a swordfish on every single one of our daytime swordfish trips these past two weeks and most trips we caught two swordfish. The typical size has been 80 to 150 pounds, but we did catch a big swordfish with one of my best customers which weighed in at 323 pounds. We now have a portable electronic digital scale and there is no more guessing on the weight of the fish. Itâs one thing to hear someone say they caught a 200-pound swordfish but now we will have an accurate weight on every single one of our fish. The conditions have been almost perfect for daytime swordfishing with light current and for the most part calm seas, although our last swordfish trip we fished in 20 knots of wind, but we did manage to get a very feisty 90 pounder. What has been awesome is that even the smaller fish have been putting up quite the fight and the 323 pounder really fought! Although most people opt to fish electric reels for daytime swords, we do have the Hooker detachable drive reel so when we hook a swordfish, we can remove the drive and fight the fish manually. If the angler doesn't want to manually crank on the reel, we can leave the motor and the angler fights the fish with the motor. We can also follow IGFA rules and drop a completely manual reel with appropriate leader lengths and catch a swordfish following IGFA rules. The misconception is that it is cheating using an electric reel but itâs not just hooking the fish and turning the motor on. For one, you still need to hook the fish, then you need to keep the fish on by manipulating the drag and the motor. So, when the fish runs you have to turn the motor off and when allowable you turn the motor on to gain and the whole time you use the variable speed and the drag to keep the fish coming. It is definitely not hook the fish and turn the motor on the whole time and just expect the swordfish to come to the boat. There is quite a bit of skill involved even with an electric reel. We also did a nighttime sword trip, but the weather was extremely rough and windy, and we ended up calling the trip early. We did catch a tuna on the sword baits but more importantly had two swordfish bites. I truly believe if we stayed the whole night, we would have gotten one. The good news is that the swordfish bite is right on time this year. Last year the bite didnât really pick up until January, but this year October has definitely been good, and I don't see it slowing down until March. 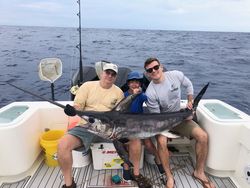 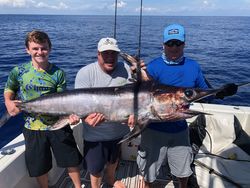 When we havenât been fishing for swords we have fished on the edge with live baits and kites and have caught sailfish on every one of our trips. Besides sailfish we have had good luck with mahis and kingfish as well as some bonitos and an occasional bottom fish. Although it is early into sailfish season, we are seeing a fair amount of sailfish already and our true sailfish season doesn't really start for another couple of weeks
Below is a link to one of our sailfish from last week.
https://www.youtube.com/watch?v=tW1edQt9MPY 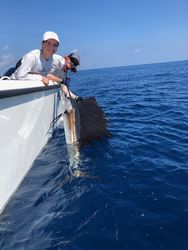 Last on our list is the wahoo have finally shown up in Bimini and a lot of the boats there have been catching 6 to 10 wahoos per day. I don't have any scheduled wahoo trip in October but hopefully will get over there and get in on the great wahoo action soon.

So, as you can see, if you ever wanted to add a swordfish to your bucket list or simply love catching (and eating) swordfish, now is the time. It is also the time for hi speed wahoo trolling in Bimini. In another few weeks we will be in sailfish season so now is truly the time to book your trips.