Great Fishing in the Bahamas 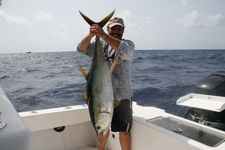 For the past 12 days I have been in the Bahamas and have enjoyed some of the best 12 days of fishing you could imagine. Before we went to the Bahamas, I had some trips here. We had a few swordfish trips both day and night. The day trips produced a nice 230 pound swordfish, plus quite a few dolphin and also a sailfish. There are not many places where you can catch a few different species of billfish in one day and in South Florida the reality of either a swordfish or a sailfish can happen on any given day. Sometimes you may be lucky enough and catch both on the same day. Our night trip also produced a swordfish as well. We did have one daytime swordfish trip that we didnt catch a sword, but the weather was pretty lousy and we had good anglers on board that were interested in the daytime techniques as these guys have caught plenty of swordfish at night.

In the Bahamas, my first trip was over to Bimini. The fishing was absolutely great. We targeted yellowtails snappers in the morning and had a lot of success with really big flag yellowtails. In the afternoon we moved and targeted mutton snappers. After a slow start, we made another move and started to catch big mutton snappers. The mutton fishing in the past few years has been off a bit, but I can tell you that this trip, the muttons were biting extremely well. The next day we decided to troll for a blue marlin and dolphin. We did have one blue strike our lures, but we never got a solid hook up. We did find the dolphin and caught and released plenty of them. We also found huge schools of skipjack tunas crashing bait on the surface and caught a few of those as well. Everyone had a great time and we caught a lot of fish.

Our second trip, we targeted yellowfin tuna in the Tongue of the Ocean. The yellowfin tunas were off a bit last year, but that was not the case this year. This was my best trip for yellowfins so far. The tunas were definitely biting. Most of the time we had double headers of big yellowfin tunas. Our biggest fish was just shy of 100 pounds and most were from 40 to 70 pounds. I went through all my tackle meticulously before this trip, and I am grateful I did this as we needed plenty of drag to fight these fish. My Biscayne Rods and Alutecnos reels certainly held up to them, and my big SeaVee with Mercury Verados got me there and back safely and comfortably.

I like catching all kinds of different fish, but there is nothing like seeing a big yellowfin with its yellow streamers pinwheeling just under your boat. The fish fight hard to the very end and are one of my favorite fish to catch. We also caught some very big dolphin as well as some mutton snappers and yellowtail snappers.

It was a great 12 days of fishing with great people on board. My only complaint is I wished we could have stayed longer. That being said though, we still have plenty of summer left and the fishing remains strong all summer long in the Bahamas. If you are interested in fishing in the Bahamas, please give me a call and we can set something up.

Summertime is also a great time for swordfish, either day or night, or for hunting dolphin in the Gulfstream. If you dont have enough time for a multi day tip to the Bahamas, then we can do a day or night trip for swordfish, or a day trip for dolphin or a trip on the edge for kings, sails, tunas, bonitas and wahoo. And by the way, there have been some big wahoo on the edge. I have seen or heard of at least two wahoo over 60 pounds in the past week. Book that trip now and you may be the next one to catch a big tuna, wahoo, swordfish, or plenty of snappers and groupers!