What a great start to sailfish season. We have caught sailfish on every trip and as many as 8 in one day. There was one day that the wind was north, the current was going good and the fish were everywhere. A buddy of mine caught 31 sailfish that day, but unfortunately we had a cancellation that day and werent able to cash in on that bite. What a shame as that charter would most probably have had one of their best fishing days ever. The sailfish have been from 180 to 100 feet of water and almost all are being caught kite fishing. Besides the sailfish, there has also been a lot of mahis on the edge. There are some days that the mahis are in as shallow as 40 feet of water. They are in there chasing ballyhoo and you can see big bait showers with mahis exploding on the ballyhoo. Mixed in there have also been big bonitos chasing the ballyhoo around. Other days the mahis have been more on the edge and also in the deeper water so it pays to keep a good eye out to where the bait is and you will usually find where the mahis are. The mahis are all good size fish as well with a lot of them between 10 and 25 pounds. Always a great bonus to catch a big mahi or several mahi in between sailfish strikes. Besides the sails and the mahis there were some blackfin tunas and bonitos around as well as a boatload of those pesky small brown sharks. Hopefully those things will migrate through as they can terrorize a kite spread.

We also made two trips to Bimini to go wahoo fishing. Using he same techniques, this will clearly illustrate how the weather can really affect the fishing and conditions clearly make a big difference on what you catch. The first trip we trolled from Bimini to past Riding Rock and we had zero wahoo bites. We caught a few big cudas but not what we came for. The weather was a big choppy but not too bad and rain was threatening but we didn't get much of it. It was 2 days before a front was coming and that should have been a great time for wahoo fishing. When we got back to the dock, it was pretty much the same story for everyone, maybe one or two fish caught and all in the early morning before we got there. So the plan was to get up early and capitalize on the early morning bite. We got up at 6:30 the next day and were greeted by what looked like the end of the world. It was blowing 30mph, solid rain everywhere, big black clouds and more was coming. Looking at the radar there was a big squall line that we waited to pass and there was a short break in between another line so we made the decision to shoot back home in between the squall lines. We ran through the Gulfstream and boy did that new 37 SeaVee impress me. With wind around 25 mph and seas around 4 to 5 foot at times were able to get her up to 40 knots and just running on top of that sea. It was really an impressive ride. The customers I was with were very long time repeat customers and I wish we could have had better fishing. They understand fishing, but I still took care of them price wise. The other wahoo trip was just a few days ago and again with long time repeat customers. Roger and Doug have probably been fishing with me for 20 years and they have already had some great trips but we were about to have another good one. We crossed to Bimini on Tuesday and seas were 2- 4 and we got there in about one and a half hours. We cleared customs and hen started fishing, trolling our way towards the south. After 2 and a half hours on no bites, I was started to get a bit nervous that the wahoo fishing was just not happening. We decided to troll to a deep drop spot. About a mile or so away from the deep drop spot we had a massive strike on the long lure. The fished peeled out over 1000 feet of line on the first run. The reel line was screaming off the reel so fast I thought the reel was going to break. After the first run the fish settled down but you could tell that it had some weight. We leadered it to the boat and it was going to be my biggest wahoo caught while high speed trolling. Two quick gaffs and we had here in the boat. The fish taped out at 70 inches in length and a 32-inch girth and weighed out at 80.6 pounds. My previous biggest was 63 pounds. So the new boat bought us some luck and got us our biggest wahoo to date. It was also Dougs and Rogers biggest wahoo ever. Since we were close to the deep drop spot, we dropped and caught some nice yelloweye snappers. We put the lures back out and trolled north. About an hour late we caught another wahoo and it was also a big fish around 55 pounds. We trolled all the way back to Bimini and were almost ready to call it a day when we got another fish. Put them back out and got a quick doubleheader of wahoo. We circled back around and caught another one. So from trolling for 5 hours and catching 2 fish we now caught 5 more in 15 minutes. With a box full of big wahoos we called it a day. The next day the plan was to troll north and hit a new deep drop spot. On the way up we caught a couple of wahoo and then deep dropped and caught some yellow eye snappers at the new spot. The wind kicked up again and made it for a bit of a bumpy ride but the new 37 can certainly take a big sea and she got us back safely and comfortably.

The Christmas holidays are almost here. FYI  I do offer gift certificates for full day, half day or ¾ day charters that make a perfect gift for that special someone in your life that you simply cant find the perfect gift. They have gotten quite popular in the past few years so if you are interested give me a call and we can set it up for you. Also if you have friends and family coming to town during the holidays, give me a call and lets take them out fishing so they can see what great fishing South Florida has to offer. Remember, you cant catch them on the couch! 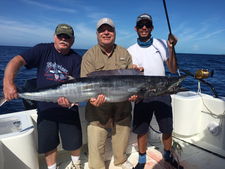