Everyone knows how much I love swordfishing. I have been chasing swordfish for over 25 years and have seen the highs and lows of this fishery. I have seen the night bite go from non-existent to 10 bites a night to slow again. Same as the daytime fishery. Our first swordfish during the day was back in 2007 and we were one, if not the first boat in Miami to catch a daytime swordfish. Here again the fishing went from phenomenal to slow but even at slow there were periods that the day fishery remained very good. This past month we have seen a tremendous increase in daytime swordfish. The bite is red hot and we have caught fish on every one of our trips except for one and even that trip we had three bites but failed to stay connected. Some of the days we have been getting five shots a day, and it seems that all of the fish are decent size. We have caught fish from just legal to over 300 pounds these past two weeks. This has been the best daytime swordfishing I have seen in the past 5 years. Unfortunately it also coincides with our winter sailfish season so most of the days we are booked on sailfish trips. I don't know how long this swordfish bite will last, but if it is a fish you would like to add to your bucket list, now is the time to go out there and give it a try. 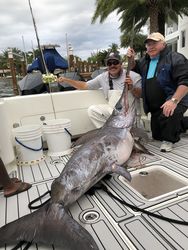 Sailfish season has started a bit slow for us and that has been the case the past two years where December through mid February have been slower than normal but March through May have been great. The same scenario seems to be playing out again this year. Don't get me wrong we are still catching sailfish on practically every full day trip, and some trips we have caught up to 4 per day, but we should be consistently seeing 3 to 5 sailfish per day and many days with 10 or more. There are hints that the big push of fish is coming. Just yesterday we were fishing and all of a sudden we had three sailfish on the short bait and two on the middle bait. We ended up hooking a sailfish on each bait and caught both of them, but when you start seeing bigger packs of fish, that means that the fish are starting to push into our waters.

Besides the sailfish and swordfish, we have been consistently catching a few mahis on every tips along with some very decent size blackfin tunas and a few kingfish so a mixed bag it has been the norm lately. 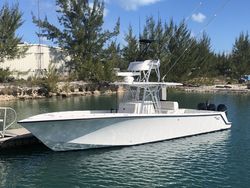 The Miami Boat Show starts tomorrow and my boat will be at the show with SeaVee boats. I will also be there doing sea trials on the numerous SeaVee boats there powered by Mercury outboards. Stop by and say hello and also check out my new ride and see what other boats SeaVee has to offer.

Now is the time to book your winter trips especially with the sailfish bite about to explode and if it's a swordfish you are after, there is no better time than now. Book those trips and lets go catch some fish!