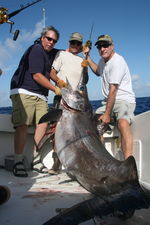 Starting in on the edge, the sailfish are definitely starting to show up and it has been a very good early season so far. The trips we have done on the edge have averaged 3 to 4 sailfish per day and it is still October. The reports from farther up north to the top of the state have been very good and we are going to start seeing a steady push of fish with each cold front. It is amazing how every year, right around the same time, the sailfish start pouring in. Some years are better than others, but it is always good and getting better. There is definitely an increase in sailfish catches and that is probably due to better conservation via circle hooks and longline restrictions, but is also due to becoming better fisherman and safer, better release techniques by sportfisherman. Also on the edge have been some decent mahis and a few kingfish. I also heard of a few cobias being caught. The majority of fish are being caught with live baits and kites.

I have also done a bit of swordfishing both day and night. We had one night trip that we only had one bite and that fish pulled off and another night trip that we caught a couple of fish. The daytime trips have been better with more bites and definitely bigger fish.

I have a great customer from Connecticut come down and fish with me basically once a year. We mostly swordfish but have done other trips as well. John definitely has some good luck. Our first trip we slayed the big kings, cobias, tunas and sailfish while fishing on the edge. The next trip we caught a few daytime swords up to about 325 pounds. Our last trip we went sailfishing and ended up catching 22 sailfish in one day. John came again this week and I was hoping his good luck would continue and it did. The only thing about John is that usually windy weather follows him. Our first trip the seas were up a bit but we still decided to go daytime swordfishing as this is what he really likes to do. After a slow morning with no bites, I made a move and it paid off as we caught two swordfish on our last two drops. The next day the forecast was for the seas to come down a bit, but unfortunately the weatherman was definitely wrong and the seas and wind were up. We slowly made our way to the sword grounds and made our first drop. Within 5 minutes there was a slow tap on the rod and then the rod bent way over and it was game on. The fish fought on the bottom for bit and then started to swim the lead up. Everyone on board new it was a good fish and we were ready for the battle. As usual, the fish came up and at first glance I thought it was about 250 pounds. It came up into the corner of the boat and we had a shot with the dart, but missed. When you miss the dart shot, it sometimes spells a bad omen and the fish felt the dart go by and quickly left the scene. John was now fighting her and hand cranking line as best he could. Being a tuna fisherman from up north, he knew how to battle big fish. We fought this sword for at least an hour and a half and each time we would get her close she would take off again. We finally got her close enough and I still thought she was about 250 pounds. After we had the gaffs in her and she hit the deck, I realized she was quite a bit bigger and was closer to 400 pounds. The size of her head and her girth was quite large and we were ecstatic to have her on board. We quickly got the cockpit ready and dropped down another bait. We got a bite almost instantly, but couldnt stay tight. Another drop and again almost instantly we got another bite and caught another nice sword about 180 pounds. With two big fish on the deck and federal law only allows us one fish per paying customer both John and Mark agreed to start heading back and look for dolphin on the way in. Back to the dock a big crowd formed to see these great fish and John and Mark went back home with plenty of coolers stuffed with swordfish steaks.

Not all trips can end this well, but you have to try and Ill give it my best effort every time to make it a great trip. The trips for sailfish season are definitely starting to book and we have more swordfish trips planned as well. I still have plenty of open days for November and November is an excellent month for sails, swords and wahoos in the Bahamas. Give me a call and lets get that good luck rolling.