I hope everyone had a great Thanksgiving and now we are rapidly approaching the Christmas holiday week and the end of the year. 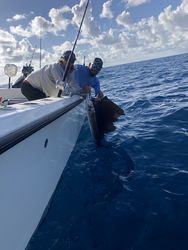 The fishing in Miami has been good with a mixed bag of sailfish, a few wahoo, mahi, kingfish and tunas. We have been mostly live baiting with kites, but we also did a trip to Bimini for high speed trolling for wahoo. Starting in Miami the sailfish bite has just started. We are not seeing a huge number of sailfish yet, but we are catching sailfish on practically every trip. That being said, we just had our coldest cold front roll through last night and that should definitely pick up the sailfishing. While we have been targeting sailfish, we have had quite a few kingfish and mahis eat the kite baits as well as some wahoo and blackfin tunas. Just a few days ago, we had the kites out and we hooked a blackfin tuna. As we were reeling in the blackfin, something came and bit its tail off. When we had the blackfin alongside the boat I looked down and saw a decent size wahoo under the tuna. It was obviously the culprit who bit out tuna. Even though we had flatline and deep lines out on the other side, I pitched a live goggle eye at the wahoo. The wahoo chased it for a bit but faded out of sight. A few seconds later the deep line with our new Penn Spinfisher came tight and line was screaming off the reel. With the speed of the run it was obviously the wahoo we had just saw. I was confident we were going to catch this wahoo as I had a small trace of titanium wire on the rod that got bit. After about 15 minutes we boated a respectable 40-pound wahoo. It just goes to show you, that you have to be prepared and have baits out all the time. Besides the occasional wahoo, there have also been quite a few decent size mahis both on the edge and out bit deeper. 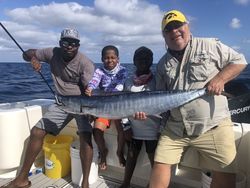 We also did a trip to Bimini and we did catch a few wahoo. When the wahoo fishing slowed down, we went deep dropping for yelloweye snappers and scored pretty well on those. 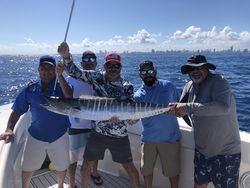 The holiday week is approaching quickly and as of right now we only have a couple of openings left. If you are in town or have friend and relatives coming in town, now is the time to reserve the few dates that are left. We are also offering gift certificates for a trip on board the âDouble Dâ, so if you have someone special that you want to give an awesome gift to, please contact us. I also just did a YouTube video of the new boat so prospective clients can get an in depth look at the boat before jumping on board
https://www.youtube.com/watch?v=nDDIjpcooac