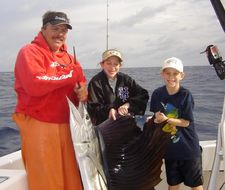 Another two weeks has gone by. The fishing for the most parts has been exceptionally good. We have caught sailfish on every single trip but one. The one day we didn?t catch a sail was when the conditions just weren?t right. The key to sailfishing has been current. We have had pretty good North current almost every day and that is why the sailfishing has been good. Our best day since the last report we went 8 for 11 on the sails. We have been catching mostly from 2 to 6 sailfish per trip. The fish have been moving around, but mostly the bite has been from Key Biscayne north to Haulover Inlet. Live threadfin herring has been the bait of choice.

Besides sails, we have also been catching a fair amount of dolphin. The dolphin have been eating the kite baits pretty regularly. Mostly the dolphin have been schoolies from just a few pounds to about 12 pounds. While live baiting the other day, we also caught a small yellowfin tuna. It ate a goggle eye on the kite. Size was only about 30 ?35 pounds, but the strike was pretty vicious. That is now the fourth yellowfin tuna we have caught this year.

The one disappointment in the past few weeks has been the lack of kingfish. The few that we have caught have been on the small size. That should change soon, as March is usually the beginning of the spring kingfish run. The kingfish in the spring are usually much bigger and can be quite abundant. We are ready and waiting for them to show up. We have been catching quite a few bonitas already. The bonitas have shown up early this year, and hopefully that means the blackfin tunas that are sometimes mixed in with them are pretty close behind.

Since the last report we haven?t done any swordfishing, but we have two trips scheduled for the week and quite a few more in the next two weeks.

I mentioned it in my last report, but now is the time to make your reservations for the Bahamas. Those trips are always a blast and the fishing is usually great. That?s it for now, give me a shout and lets go fishing!