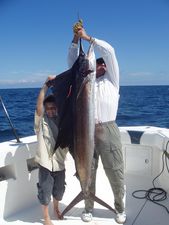 The fishing during the day has been changing as the conditions changed. We ran south of Fowey a few days and found loads of kingfish. The days we did well with the kings, we had decent North current. When the current died off, we struggled only catching a few kings and some AJ?s. There have also been a few dolphin on the edge. The edge has been anywhere from 150ft to 400 ft of water. The boats actually trolling the edge have done the best and besides dolphin, the guys trolling planers or downriggers have been catching a few wahoo as well. Until this past week, sailfishing was slow, but in the last three trips we caught a sailfish on each trip and on one of the trips we caught two. These are not the numbers we are hoping to see in the very near future, but any day you catch a billfish is a good day. Speaking about sailfish season, we actually got a hint of our first cold front yesterday, and as these fronts start pushing south, sailfish will be following the schools of bait migrating southward. We are going to be getting into an exciting time of year, so book your trips early and come out and have a blast catching fish.

The nighttime swordfishing has been excellent. We did have one trip (End of September) where we didn?t catch one, although we did have one on, but every trip since then we have caught 2 or 3 swords per night. In the last 4 trips we have caught 11 swords. Most of the swordfish have been decent size and have averaged around 150 lbs. Our biggest this past week was 243 lbs. In can?t say enough about this mighty gladiator, but each fish we catch shows us how strong and powerful they are. Even the small fish can fight hard, and the ones over 200 pounds will definitely show you who is boss. The fish we caught that was 243 pounds, we had 51 pounds of drag on her. Even with that much drag, she still pulled off line at will. That is an insane amount of heat to put on a fish, but we had a problem with the line (tangle) and if we let her run down to the tangle, we would of busted her off losing the light, leader and most importantly the fish. With that much pressure, we were able to stop and turn her and luckily all the gear held and we were able to catch this fish.

As the cold fronts start, the fishing is definitely going to heat up, so now is the time to book your trips!