In the past few reports, we have noted how slow the mahi fishing has been this whole summer. In September we pretty much assumed that it was over and hopefully we would have better luck mahi fishing next season. As we dismissed the season, the best mahi fishing of the year is now taking place in late September and October. You would expect bigger mahis this time of year but not only are we seeing bigger fish, but we are seeing a ton of them It is not unusual to go out and catch 30 or so mahis every day. That might be the norm in the summer, but not in the fall. That coupled with the fact that each fish is bigger and much above the legal size, it's a win â“ win! Don't know how long this late season run will last, but we will take it especially knowing that sailfish season is knocking on the door. 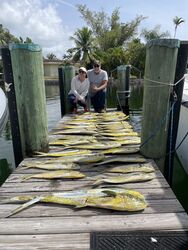 This fall has also proven to be a very good start to the fall swordfish season. Traditionally Sept â“ December have been great daytime swordfish months, but the past few years, just like a lot of the other fisheries, it seems the swords started off late and it was better November through February. This year we are back on track and September and October have been very good. We have caught a swordfish on every single trip, except for one trip. The swordfish we have been catching havenât been huge, but there have been some very big swordfish caught recently. There have been a handful of 300 and 400 pound fish and even a 500 pounder was caught recently. All our trips have been daytime trips, but we do have a nighttime swordfish trip coming up next week, as well as 5 or 6 daytime sword trips. So as you can see, we are in the thick of swordfish season.

We also made the run to Bimini to do a bit of high-speed trolling for wahoo. I was super excited to do this again and we were rewarded with some nice size wahoo. Our biggest on Day 1 was 50 pounds and then on Day 2 we caught one 55 pounds as well as some smaller ones. If you havenât experienced it yet, there is no other sounds like the sound the reel makes when a wahoo hits the lure while youâre trolling at 15 knots. The bite is vicious and long. All I have to say, is your tackle better be up to the standard. Any faults in your rigging and you will find it out quick. 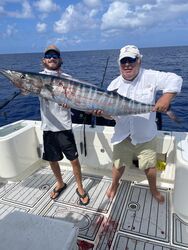 We are already getting a bunch of our winter bookings and we are booked completely till the end of this month. November and December are filling up quick. So, look at your calendars and whether its swordfish you want to scratch off the list, sailfish on the kites, or wahoo in the Bahamas, give us a call or check out my online calendar on my website for pricing and availability.