September marks the beginning of the best three months for sword fishing and I am eager to get out. The past few weeks we have done mainly trips on the edge and one nighttime cubera trip, and have not been out for swords, but the reports I have been getting are on fire. Last week there were at least 3  400pound fish, 1  500 pound fish and a whopping sword of 694 pounds caught. The 400 and 500 pounders are insane, but the 694 must have been awesome. A teenager, his dad and crew caught it. They had only been sword fishing 2 or 3 times and this is the first swordfish they caught. It just goes to show you, you have to be in the right place and the right time and hopefully do all the right things, which they apparently did. Congrats to them on one spectacular catch!

We have been fishing mostly on the edge and although it is only September, the best bet has been the sailfishing. We have caught a sailfish and every single trip but one and that one was a half-day trip. We did hook a sailfish that trip, but unfortunately we did not get a release on it. Our best day we caught three sailfish and have averaged 1 to 2 a trip. Besides the sailfish, there are still quite a few bonitos around as well as some kingfish and an occasional wahoo. I havent been offshore for the mahis, but have heard of some mixed reports, which is typical for this time of year. Some guys have been finding the mahis under birds mostly and some have been striking out.

I also mentioned we did a night cubera trip and that did not go very well. The weatherman was forecasting 5 to 10 knots of wind but I think it was more like 5 plus 10 knots. We started with 15 knots out of the east, which made the ride to Ocean Reef a bit uncomfortable but not terrible. As the sun fell the wind increased to 15 to 20 knots out of the southeast and with that wind came rain squalls and lightning. We had the right bait (live lobsters) and were fishing the right area but after 3 hours of not a bite, the anglers called it a night. I spoke to other boats fishing that night and nobody had caught any fish at all so maybe we made the right move. Unfortunately it was with a really good customer of mine but I made him a sweet deal on his next swordfish trip to make it up to him. I know I cant control the weather or the fishing, but I still feel bad when the trip doesnt go according to plan.

The best bet this month is swordfish both day and night with the daytime fishing a bit better than the night fishing. October is fairly booked up with sword trips but I still have plenty of open dates including weekend date for swords. Give me a call and lets set up that trip and maybe we can be the next ones to catch a 600 plus pound fish!! 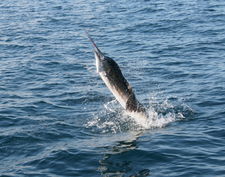