The fishing continues to be awesome for the past two weeks. Let me start off with our first trip of the season to the Bahamas. We went to Bimini for three days and had a great time. We had a great crossing. We cleared Customs and Immigration, got situated in the hotel and took it easy for a few hours. We then headed out to try to catch some mutton snappers. We got to our spot and our very first drop we caught a very nice mutton snapper. We were fishing two rods and had multiple double headers. The good news was besides the fish being there, they were all very good size mutton snappers. 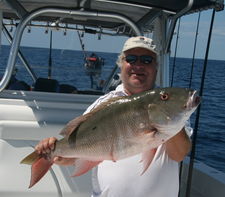 The next day we decided to hed to Northwest Channel and find some yellowfin tunas. We had great weather again. On the way there we spotted some frigate birds and caught a decent size dolphin under the birds. The key to the tunas is to find the tuna birds and hopefully they are on yellowfin tunas. Our first flock did not produce any fish. The next flock we caught some skipjack tunas. The third flock we found yellowfins, blackfins and the skipjacks all mixed in. We caught all three species including yellowfin tunas up to 65 pounds. We caught the all the tunas on 30 pound and 50 pound tackle. 50 pound tackle may seem heavy, but a good size yellowfin can create havoc on that tackle, especially when a large shark is trying to chase it down. The Bahamas are known for sharks and they certainly will eat a tuna. We did have some yelowfins eaten by sharks, but the majority of them we caught by fighting the tunas as fast and as hard as the tackle would allow. It is certainly a sight to see a big yellowfin pin wheeling under the boat as you inch him closer and closer.

The last day we decided to try some deep dropping and then ride back looking for mahis. We accomplished both goals, plus some more. After hitting our first deep drop spot we picked up and ran farther north. On the way there, one of the guys saw a big splash a few hundred yards away. I looked over and saw a nice blue marlin thrashing on the surface. I turned the boat and raced over there while we got a big goggle eye and hooked it on a 50 pound rod. As we pitched the bait over, we can clearly see a 400 pound plus blue marlin batting a 10 pound dolphin around. It then got the dolphin in its mouth sideways. It looked just like a dog would have a big bone in his mouth. The marlin at that time was no more than 10 feet off our bow, but with a big dolphin in its mouth, there is no way it was going to drop that and eat the goggle eye. It stayed with us a while probably just trying to show off her prized meal, and then slowly swam down with the dolphin sideways in its mouth. I have never witnessed that before and it has to be one of the coolest thing I have ever seen. On the way back we did find some decent dorado and also saw a 100 pound swordfish swimming on the surface. We got within 20 feet of her and by the time we try to bait her, she sank down and out of sight. It was obviously another cool thing to see.
Overall it was an absolutely great trip.

Back home the fishing is still red hot. The sailfishing has slowed down a bit, especially if the wind lays down, which it usually does this time of year. There have been quite a few blackfin tunas around and a lot of big kingfish as well. We have had some great days with both those species and I may be having the best year ever with those big kings. We had a few days were we have been averaging kings between 20 and 40 pounds. There have also been dolphin offshore, both schoolies and bigger bulls and cows. Another very hot topic has been the big daytime swords. Although I havent really done any daytime swording in a while, there have been some very big fish caught, including a swordfish over 700 pounds that was caught yesterday. In addition to that fish, I have heard of quite a few fish between 300 and 480 pounds caught. I have a few days open next week and the weather should be awesome for daytime swording, so if you have the itch for a big fish, let me know because I know I have that itch. .The night bite for swordfish has been good as well.

Summer is here and now is the time for trips to the Bahamas, day and night swords, hunting for mahis in the Stream and going after blackfins in the late afternoon. I also cant forget about the big kings on the reef. As you can see, the fishing is hot, you just got to go out and do it.

PS  There is no oil from the Gulf Spill in South Florida, and the latest forecast is that that oil will not be heading our way!