Is Luck Going Your Way 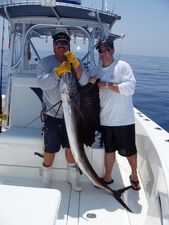 The fishing for the last week has been so ? so at best. What has really been a bust has been the weather. We have had rain every day for more than a week and more rain is expected. Normally in June, you get afternoon thunderstorms, with clear sunny skies during the day. We have been getting rain all day and all night. On top of this, we had a tropical storm develop south of Cuba, which is heading into the Gulf of Mexico and away from us, but it is pounding us with more rain. The days we have gone out, we have been mostly catching sailfish and a few tunas and kingfish. There have been some dolphin around both on the edge and farther offshore in the Gulfstream.

We fished the Miami Dolphins tournament last week, and although we didn?t place, we did have quite a bit of action and unfortunately some luck that didn?t go our way. I picked up my customers at Miami Beach Marina with a well full of herring and pilchards and another well with goggle eyes and runners, plus a cooler full of ground chum. We ran down south to fish. The plan was to live chum heavy in the first hour and hopefully chum up the tunas and maybe a king or two. Then we would drift the rest of the day and pick at fish until almost lines out when we would live chum heavy again to get the afternoon tuna bite. We executed the plan perfectly and the fish showed up as expected, but for one reason or another we failed to get them in the box. On our first drift we hooked an estimated 30-pound kingfish that we got with 10 feet of the boat. After he saw the boat he surged and broke us off. While this was happening, I was chumming pilchards on the kite side of the boat and the blackfin started pounding the freebies. Unfortunately there was so much seaweed around; that our live baits on the kite were totally engulfed in weed and the tunas wouldn?t bite for us. We also missed a sailfish and caught a bonita or two. We made a move to get away from the weed, and the rest of the day we caught another king and bonitas and had 5 sailfish on. The end of the day was approaching and we still had 150 pilchards left. As per plan, we live chummed heavy and boy did the tunas show up, but this time they were 40 ?70 pound yellowfins that were within casting distance of the boat and blasting the freebies we were pitching. We hooked fresh livies on and tossed it out to them, but not one bite. We had light fluorocarbon leader on and we still did not get a bite. Although we didn?t get to catch the tunas, we still had fun with the sails and with the other fish we caught. Hopefully next year, luck will be on our side.

That?s about it for now, I am heading over to Andros the Bimini for over a week to chase the tunas and dolphin and do some bottom fishing as well. I will be gone for a while so it may be a few weeks until the next report, but I am totally looking forward to this trip and should have some great pictures and stories.