For the past month or so we have seen very good fishing for mahis in the Gulfstream. As is typical in the summertime, these fish are not very big, but what they dont have in physical size they make up in sheer numbers. It is not uncommon to find schools of 100 plus fish. They way we target them is I run offshore and look for signs of life. We focus on anything floating in the water, birds diving or big frigate birds hunting in an area. Then from the tower I can usually see the fish swimming in the water. Once we locate the fish we can either cast small live baits to them, small cut bait or jigs. Its important that once you hook a dolphin to keep it in the water as the rest of the school sticks around. What we actually do is hook as many as five or six fish, keep them all in the water and then as we pull fish out of the water, rebait that hook and hook another one. We keep the freshest fish in the water and remove the ones first hooked in that order. It is important that you dont leave one fish on the line in the water the entire time as that fishes color starts to fade as does his swimming and the rest of the school get wary and eventually leaves.
Another tactic we use is since I fish quite a bit, I know where the fish were yesterday and if I dont see anything great on the way out, once I get to were they we the day before, I put out a few small lures and troll while looking for the signs mentioned above.

The past two weeks the mahi fishing has been very good and obviously some days will be better than others but for the most part we have caught at least 20 or more fish per day and earlier last week we were catching our limit, which is 10 mahis per person per day. Early last week the mahis were mostly caught under birds. This week we have seen a big influx of huge mats of Sargasso week. Sargasso weed is usually great for mahi fishing as the fish can hunt and hide under the big mats, but there has been so may mats of grass that it has been difficult to find which mat will hold the fish. Luckily the tower on my center console has helped a great deal as I can drive from mat to mat and look in the water for the mahis. Once I see them we can fire out baits to them and get hooked up.

The majority of our trips have been for mahis but I also had one daytime swordfish trip and two trips on the edge. I wish I had some positive reports about the daytime swordfishing, but on my trip we fished all day and never had one bite. I had the freshest of baits and our drift was absolutely perfect. We reset numerous times in areas that held fish, but unfortunately no bites. This is our second trip in a row without a bite so things will have to change very soon. Luckily the best time of year daytime swordfishing is quickly approaching and August through November are often the best months.

I also did a couple of trip on the edge and was very pleasantly surprised but the amount of big kingfish in our area. We caught kingfish up to 40 pounds and the smallest one was probably 15 pounds or so. Big kings on light spinning tackle are a blast. Besides the kings, there have also been some bonitos thrown in and an occasional snapper or grouper on the bottom.

We are already in July and July is usually a drier month that June so this is a great month to hed over to the Bahamas and catch some snappers and groupers as well as target those big yellowfin tunas in NW channel. Its also another great month for fishing for mahis in the Gulfstream, so whatever you r preference, give me a call and lets set that trip up! 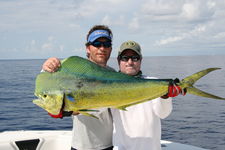