May Starts Off ON FIRE! 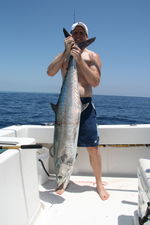 I thought this past April was a good month, but it looks like so far May has been even better. Variety has been the key with lots of sailfish, big kingfish, a few dolphin, blackfin tuna, wahoo, etc.

Lets start with one of my favorites  sailfish. They have not disappointed us at all as we have caught at least one sailfish one each trip, but have caught as many as 11 in one afternoon and really have been averaging 5 or 6 sailfish per trip. We had at least two days that we caught over 10 per day. The spring sailfish have also been on the bigger size and it is not uncommon to fight then for over 30 minutes. We have also seen a lot of freejumpers. A freejumper is when a sailfish is seen jumping without being hooked up. The key when you see a free jumper is to position your boat in line with where the freejumper is going. On a recent half day trip with a great client of mine, we finished catching bait and were running down the edge when we saw our first freejumper. I got the boat positioned to where I though the fish would end up and within 30 seconds had a doubleheader. My customer comment was well that certainly didnt take to long. We caught 6 sailfish on that half day trip as well as kingfish, blackfin tuna and tons of bonitas. I had that same customer three days later, and the conditions had changed drastically with green water and no current. I had a good report that the water was blue with lots of current down off of Ocean Reef. Now Ocean Reef is quite a distance from Miami, but as most people who have fished with me know, I want to catch fish and if I have to burn more fuel to go where the fish are, so be it. Well the gamble certainly paid off. We saw well over 75 freejumpers down there and ended up hooking 7 sailfish and caught a few kings and a big blackfin tuna. My customer had entered a small fishing tournament at his childrens school and that tuna won him top tuna as well as largest fish. 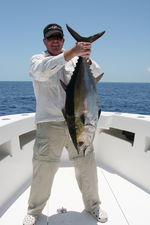 Besides sailfish and blackfin tuna, we have also caught our share of nice dolphin both offshore in the Gulfstream and fishing on the edge. The mahis have been averaging 10 to 30 pounds and have been mostly eating live baits. We have either chased frigate birds around our caught the mahis on the kite baits.

There have also been quite a few kingfish around, and a lot of really big ones. I had a trip this past weekend where I only had one angler on board and I certainly wore him out. We caught a few sailfish but the kingfishing was one fire. We caught and released well over 15 kingfish. The largest was 51 pounds, followed by 42 pounds and then a 35 pounder. Those are some serious kingfish. We also caught a bunch of bonitas and at one point I could only get one or two flatlines out before we would have a fish on. It was a great day on the water with lots of fish!

Summer is approaching and now is the time to get in your trip. We can target swordfish (day, night or both) go to the Bahamas for tunas, bottomfish or trolling or fish the edge of fish for mahis in the Stream As you can see, it is definitely time to go fishing and catching, so give me a call and lets set up that trip!