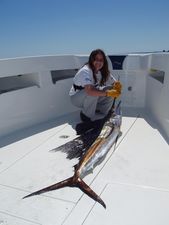 You know spring is here when you start catching a bunch of different species every day. In the past two weeks we have caught, blackfin tuna, yellowfin tuna, sailfish, swordfish, tarpon, dolphin, kingfish, cobia, bonitas, amberjacks, groupers, cudas, sharks. I?m probably missing a species or two, but you can see what diversity we have fishing in Miami.

The sailfish action has been decent. We have been catching at least one and up to 6 sailfish on each trip. Sailfishing should remain good until late May. A big thrill for me was during one of my days off; I took my 11-year-old daughter out to try to catch her first sailfish. We were successful and I was very proud of her. She did it all on her own ? from the line popping the kite clip, the hook set, fighting the fish, and after a few pictures, the release of the sailfish. Few things can top seeing one of your own children catching their first billfish! The kingfish have also shown up and there were had some decent kings yesterday, with our biggest right around 30 pounds. The kingfishing should stay good and actually get better as spring progresses. There has also been a trickling of blackfin tunas. The blackfins have been on the small size (25 pounds and under), but this will definitely change as bigger and more blackfins to residence in our area for the spring. A pleasant surprise this year has been the number of yellowfin tunas caught. We usually catch 2 to 4 yellowfins per season, but we have caught 7 so far this year, including one that we caught last week.

The night fishing has been good as well. We caught swordfish on every trip and had plenty of action on each trip. On one trip, we had free-swimming swords in the lights twice. The first fish was a solid 150 pounder that ate three of our baits up on the surface but managed to escape the hook each time. Still, what a thrill to see this great animal in its own environment. The second fish was smaller and followed one of our baits in as we were reeling it. He showed no interest though. We have two sword trips this week, so hopefully we?ll have a good report. The nighttime tarpon fishing has also been good and this is a good time of year for both consistency and for average size. The tarpon this time of year are typically 80 to 140 pounds.

As you can see, the fishing has remained good and it not hard to see why some people put April ? June as the best times to fish in South Florida.

For more info, or to have your own son or daughter catch a fish of a lifetime, give me a call and let us put you on that fish!