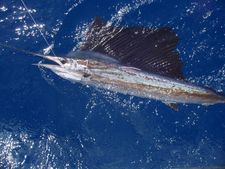 The hurricanes have left us alone, and finally we are doing what we do best ? Going Fishing. We were lucky enough to fish almost every day this past week, and the fishing was pretty good. Sailfishing has been the highlight and has been outstanding for October. Our slowest day has been one sailfish out of 2 hook ups on a half-day trip and our best day was 4 sailfish on a half-day trip as well. Miami has had some very nice looking blue water with decent North current. The sailfish have been eating live baits off the kites. Bait didn?t seem to matter, as we were hooking up with pilchards, threadfin herring and goggle eyes. Obviously we release all of our sails, but we also tagged quite a few this week. Scientists can never get enough data, and we are more than glad to help.
Besides the sailfish, we have caught dolphin on almost all of our trips and kingfish as well. The dolphin have been on the blue side of the edge and have been caught both on the flatlines and kite baits. The kings have been on the green side and the mid depth baits have been the most productive. Besides kings sails and dolphin, there have been quite a few wahoo caught as well. We didn?t catch any this week, but some of the other boats have been catching a wahoo or two per day.
With all the day trips, we haven?t swordfished at all this week. Last week we went swordfishing 4 times and caught 4 swordfish. One night we caught two, one night we didn?t get any bites and the other two nights we caught one per night. We fished the Miami Swordfish Tournament last week. The lead boat (1st thought 3rd) had three fish total; we ended up with two fish. Bases on time of our release we ended up in 6th place. It doesn?t matter too much, since the money is based on the top three. Congrats to all the boats that fished and to the ones that won. Although there were probably a few boats that missed fished, we had a decent fish on the first night. Based on the fight, it would have definitely made the scales. For this tournament, the fish needed to be 100 pounds or so to be weighed (60 inch fork length). The fish we fought for 30 minutes, only to have the hook pull, was way over that minimum weight. Three nights before the tournament, we caught a fish that was 150 pounds. During the tournament not one swordfish was big enough to be weighed in by any of the boats. I have never seen so many small swordfish caught in two consecutive nights of fishing. The only good point, is that last year we also saw a few small fish caught in the beginning of October, and by the end of October to the end of November, the was a bunch of huge (300 ? 400 pound) swordfish hooked and some caught, including two fish over 300 pounds caught on my boat.

Without a doubt, the fishing in Miami is getting very good. I am happy to see an early start to the sailfish season, and am anxious to hook that big gladiator sword this month or next. So whether you want to tangle with sailfish during the day or broadbills at night, give me a shout, and lets set up the trip!