We are about to close out January, which means we are in the heart of winter sailfish season. The sailfishing so far this winter has been fair. We are still getting one or two sails on every trip but we really should be averaging more like 5 sailfish per trip and have a few days this month of going into double digits. Not to worry though as the same pattern happened last year and the year prior and February turned out a whole lot better. A lot of sailfish success has to do with weather and conditions. Over the past week we have had decent north current but have also had a lot of green inshore water on the edge. We have hunted to find the blue water but most days it is simply nowhere to be found. Conditions change though and usually change on a daily basis, so I would imagine blue water is on its way.

We have been able to take advantage of other species. A perfect example was a day last week. We headed out with two wells full of bait and again we had green water everywhere but also had no wind at all. Even with a helium balloon strapped to the kite, you still need some wind to drive the kite away from the boat or else you kite will be straight above and your baits will be practically in the boat. Seeing these conditions I decided to run south and drop on a wreck. Our very first drop rewarded us with a beautiful African Pompano. Our next few drops we got some big barracudas. After a few more drops we decide to head offshore and started looking for something to fish to. About 6 miles out we found a raft made up of tree limbs tied together that was pretty busted up. There was fish all around this floater. There were a ton of small black jacks, big rainbow runners, sharks, wahoo and even a few yellowfin tuna. As we pulled up we dropped a vertical jig straight down and got a mid size wahoo. We then started live chumming and got a few tunas busting but every time we would through out a live bait on a hook, the jacks tore us up. We did some more vertical jigging and caught one ore smaller wahoo and a small yellowfin tuna. We did some more live baiting and caught some big rainbow runners, some sharks and another small wahoo. After catching more that enough fish we headed back to the edge and with still no wind we started trolling a deep line and some top lines and caught a couple of kingfish and called it a day. Sometimes you just have to adapt to the conditions Mother Nature throws at you. The very next day, the wind picked up and we caught some sailfish and a juvenile tiger shark. 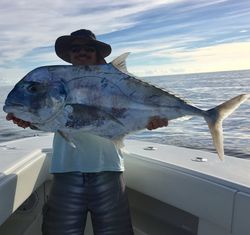 We have a variety of trips scheduled for February including one daytime swordfish trip, a wahoo trip to Bimini and a bunch of trips on the edge for sailfish. I’m sure the conditions will change and we will be in the thick of sailfish season. I only have about 10 days still open in February so give me a call and lets get that trip locked down!