Better At Night, But Still Good During the Day 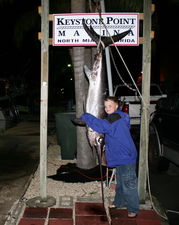 In the past report, I mentioned that the fishing was better during the day than at night, but for the past two weeks things have changed and the fishing has been better at night than during the day. The daytime fishing hasnt been bad though. There are a lot of kingfish around, but many of them are very small. The legal size for kingfish is 24 and many of the kings have been just short of that. Mixed in with the small ones have been enough bigger ones to keep you on your toes. The kingfish have also been quite deep. Yesterday, we were getting kingfish bites as far out as 230 feet of water. There have also been some sailfish around, especially farther to the south. We should start to see more sailfish on a daily basis and once we get into November, our sailfish season should be in full swing. Offshore there have been some dolphin around. You may have to hunt for them, but with the lack of boats around, once you find them they shouldnt be spooked and not too finicky.

Besides a few daytime trips, we have also done a few swordfish trips. September and October can be very good months for swordfish. The beginning of September was slow, but the last two weeks have been good. In my past three trips we have caught 6 swordfish and at least one swordfish on every trip we had. That certainly makes me feel good to see my anglers catch a fish that most have only dreamed about. Our largest fish weighed in at 148 pounds and was 65 (LJFL). There have been some bigger fish caught by the commercial fleet. This was the time last year that quite a few fish over 300 pounds were caught. I expect to see the same for this month and the next few months. Most of my customers this past week had never caught a swordfish before so it was exciting to see them get there first. The one group I had that had caught swordfish before, were introduced to there first doubleheader of swordfish. Although the lines got a little bit tangled, with a little bit of coaching and some good maneuvering of the rods, we landed both fish of the doubleheader. We also had a father and son duo catch a few swordfish, and spending time on the water with your family can be very memorable, especially when you are catching fish as well!

Although this is the charter boat industry slow season, I have managed a few charters a week and have also been taking care of loose odds and ends on the boat. I installed ARPA (Automatic Radar Plotting Aid) onto my radar for even more safety at night. I also detailed the boat and am excited since next week my new 300 HP Verados will be arriving. These new Verados will not only provide a bit more speed, but are actually a bit more fuel efficient than my current 275 Verados. For someone who spends as much money on fuel as I do, any increase in fuel efficiency will be greatly appreciated at the end of the year.

If you have never targeted or caught a swordfish before, or simply want to catch and maybe even learn a new trick or two, give me a shout and we can set up that swordfish trip while the fishing is good and the weather is cooperating. Now is also the time to start setting up your winter sailfish charters. I have booked a few already, but if you want a specific date, do it now before the calendar gets booked up.