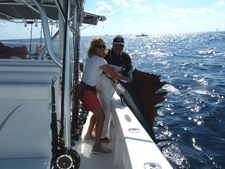 This has been a very good and consistent year for sailfishing in Miami. Since my last report, two weeks ago, we have averaged 5 to 7 sailfish per trip and had some double digit days and one incredible day catching 16 out of 17 sails. On the other hand we also had one day were we only caught two sailfish that day and also had a half day trip were we only caught one sailfish. Still, that is at least one billfish on every trip and usually a lot more.
I keep mentioning conditions, and that a north wind, blue water and north current are the ingredients usually necessary for those banner days. Well, yesterday we had south wind with north current and blue green water. Not bad conditions, but not great either. We ended up catching 16 sailfish. Today we had NW wind, blue water and north current and caught 5 out 9 sailfish. So although the conditions today may have been better, the fish thought yesterday was a better day to bite.
As has been the norm it seems this year, we only had one angler on board yesterday and that is the day we caught 16. Joe has been fishing for quite some time, although it was his first time on the Double D. Joe had mentioned that although he has fished a lot, he has not fished as much as he has wanted the past few years and was eager to get back out. The day started with a few dolphin that we missed on the kite. We reset and had both the long and middle kite bait get eaten. We never saw the fish and the way they were fighting by going down deep, we thought they may possibly be bonitas. Then a third fish came up to the short bait and we could clearly see it was a sailfish. I whiffed that fish as Joe had the other two fish on. By seeing the third fish we knew the other two must also be sailfish and sure enough, they were and we caught them. That fish that I missed was the only sailfish we didnt catch that day and ended up catching triple headers, double header, a single and a quad (4 sails on at once). It was a great day with a new friend and we witnessed some great sailfish action. The fish were hungry and there was no hesitation on the bites. Joe was happy to be back out and booked us again for next week.

There have also been some dolphin around and surprisingly there has been a decent amount of blackfin tunas around. There have also been some kingfish as well. I have not done any tarpon trips yet, but from the guides I have spoken to, the tarpon fishing has been excellent. Most boats are getting 2 to 5 tarpon per trip. The tarpon have been from 30 to 100 pounds or more.

With all the sailfishing I have done, I have not done any swordfishing in the last two weeks. I have not heard anything on the night bite, but did hear of some fish caught during the day. I have a few sword trips schedule for March, so hopefully Ill have a good report.

February is all booked up with the exception of this weekend which is open due to a last minute cancellation. The forecast this weekend looks awesome for sailfishing with a nice North wind in the forecast. After this weekend, I am booked for the next 16 days straight which leads me into March. March is steadily getting booked, but I still have plenty of dates open.

If you are interested in either this weekend or some day in March or later give me a call and lets set up that trip.