The fishing the past three weeks has been phenomenal. Sailfish have been around in abundant numbers as well as blackfin tunas, mahis, kings and an occasional yellowfin tuna as well. To start the sailfish bite has been great. We had three days in a row catching over 10 sailfish per day. The conditions were just right with blue water, north current and north wind. Even when the conditions were not as good we averaged 3 to 6 sailfish per day and the bite has been very consistent. Most of the sailfish have been caught with live baits under the kites, but we have also caught quite a few after seeing a freejumper and lining up in front of that fish and firing out flatlines with live baits. 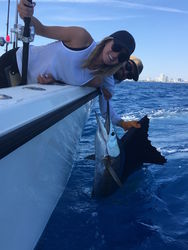 Besides the very consistent sailfish bite, there have also been quite a few blackfin tunas and an occasional yellowfin tuna. The yellowfins are not huge but in the 30 to 60 pound range but that is a lot of fun on our 20-pound tackle. We actually caught two this past few weeks. The blackfins are anywhere from a few pounds up to 30 pounds and very soon we will start seeing the 30 to 40 pound blackfins. Blackfin season does not usually get started until April so it is great to see them a month early.
Besides tunas and sails, we have also seen a few mahis and some decent ones as well. They have been anywhere form a few pounds all the way up to 45 pounds. Our biggest this past week was probably 25 pounds, but they way we caught it was fun. We saw a frigate bird diving offshore and in some rough seas we fired up the SeaVee and pushed right through the seas. Once we got under the frigate I spotted the big mahi and we tossed a live bait to it, which it immediately ate. After a short fight it was quickly deposited into the fish box.

The bigger kingfish are also showing up and although we haven’t caught any slobs yet (I am sure we will soon) there have been a few 40 to 50 pounders caught by the fleet. We also tried our hand at wreck fishing one morning and ended dup catching some decent AJ’s. Quite nothing like catch one of these big reef donkeys!
With April just a few days away, spring fishing is now here and it is definitely the best time of year to fish in South Florida. Sails, big kings, big mahis, cobias, blackfin tunas are all part of the game this month. Tomorrow we hed over to Bimini for some deep dropping and snapper fishing and might also do some high speed trolling for wahoo. It is a bit late in the season for that, but then again last year we crushed the wahoo in late March.
I still have a handful of dates open for April so give me a call and lets set it up!