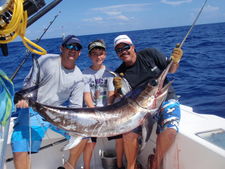 In the past two weeks we have done a few daytime sword trips, trips on the edge and fishing in the Gulfstream for dorados. Starting with the day time sword trips, the bite has been decent and seems to be getting better. In the past three trips we caught a swordfish on every trip. Besides catching one on every trip, all three fish were almost identical in size (between 120 and 150 pounds). Although respectable in weight, there have also been a few very big swordfish caught by the fleet including a 560 pounder and a few fish over 400 pounds. From late August into November is usually when we start seeing some of the bigger fish and a better all around bite, both day and night. Most of our best day time sword trips have occurred in September, October or November. I havent done any night trips for swords this month, but there have been a few caught at night. Most of the fish I have heard caught at night have been about 100 pounds, but I did also hear of a 400 pounder caught at night last week. Most of the fish caught had stomachs full of squid, so as long as the food is here, they should stick around for a while.

Fishing on the edge has produced a lot of bonitos, some kingfish and an occasional sailfish. There have also been some mutton snappers on the bottom and some amberjacks on the wrecks. For the most part and especially with the bonitos, the fishing has been pretty much non stop. You know when you get invaded by the bonitos, because every rod on the boat goes off and soon you have 4 or 5 bonitos on at one time.

Offshore in the Gulfstream, there was a very decent bite of dorados. Unlike earlier in the summer with a lot of very small schoolies, the fish now are almost all gaffers or heavy lifters. These fish are from 5 to 20 pounds and most of them were found under debris. You would pull up to Sargasso weed, bamboo or some type of floating debris and each piece of debris usually held 5 to 10 decent dorados. Although there wasnt a lot of fish under ever piece, almost all the debris had fish. The dolphin fishing has dropped off in the past few days, but that is probably more due to the approaching full moon than anything else. There have also been lots of schools of skipjack tunas in the Gulfstream. When you see a bunch of birds diving but they are moving very fast, they are on a school of skipjacks, rather than dorado. The dorado schools dont move as fast as the skipjacks do.

We are rapidly approaching September, which means the day and night sword action should be in full swing. There should still be plenty of dorado offshore and the fall kings should move in to the edge. We will also start to see more sailfish on the edge and offshore as well.