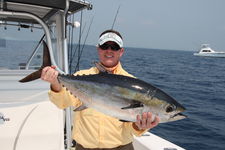 If you want action then there are several things you can try. Fishing on the edge has been good, especially if you like bonitas. There are a ton of them out there. Besides the bonitas, which are great fun on light tackle, there have also been some blackfin tuna, a few kingfish and a pretty good showing of sailfish. We have actually caught a sailfish on every trip except for one which was todays trip. The blackfins we have caught have all been descent in size from 25 to 35 pounds and almost all of them ate kite baits. The action on the edge should continue especially if the blue water and north current sticks around.

Offshore there have been some mahis. It has been a bit hit or miss, but if you dedicate the whole day, then I am pretty sure you will find them. Most of the mahis have been under birds and some under debris. The grass mats havent really been paying off for us. As a matter of fact mahi fishing on my boat has been rather slow, but part of that is we really havent dedicated the whole day to finding them. Typical example was today. There were a few boats, including us, looking for the mahis offshore. By 11:00am we hadnt found any and really none of the other boats did either. We headed back in to the edge and had action with small mahis, bonitas and a few kingfish cutoffs. After 2:00pm, the boats that were still out there we now starting to find them. Sometimes you just have to dedicate the whole day, but I had some younger kids on board and you can tell from there faces that they simply wanted to bend the rods, so I decided the best bet would be action on the edge.

Since my last report, I also did a trip to Bimini. I had repeat customers, Mike and Todd, and they really wanted to get in on some flag yellowtail action. We crossed on Friday afternoon and it was a bit of a rough crossing with winds out of the NE at 15-25mph. This is where I really appreciate my big SeaVee. It is truly a great boat and that was evident as we passed several other center consoles (I wont mention brands) like they were standing still. We werent running super fast, but just heading along at a good rate and not taking a beating. Once we got to the Big Game Club and got the boat docked the wind really picked up and was blowing over 30mph. The weather forecast was for the wind to really lay down the next day and I was a bit apprehensive since I really wanted to take Mike and Todd to the Gingerbreads where the yellowtail snapper action can be phenomenal. The next day we woke up and the wind had dropped to nothing and off to the Gingerbreads we went. We were rewarded for some really great action on big flag yellowtails and great weather for two days. It was a great trip with great customers.

I havent been swordfishing since my last report, but do have a trip scheduled this week. We are almost into July, so if you havent planned your trip to the Bahamas, a summer sword trip or fishing for mahis in the Stream, give me a call and lets get it going!