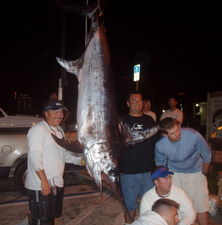 he fishing continues to be red hot. Most of the action has been late in the afternoons but we have had day that the action was non stop all day. There has been very clean blue water with a strong north current in front of Miami. Those conditions spell good fishing. There have been quite a few sailfish around, as well as a lot of dolphin. Most dolphin have been from 5 to 20 pounds, but I have heard of some bigger 30 pound fish being caught. Besides the dolphin and sails, we had a few days of red hot kingfish action with many kings caught in the 15 to 30 pound range. There have been a few wahoo around and we caught one about 25 pounds while kite fishing last week. The late afternoons have produced a very good blackfin bite. This is actually a trip that can be a lot of fun and convenient as well. I run late afternoon trips for blackfins that either start at noon and end at 9:00pm or start at 4:00pm and end at 9:00pm. Its a great way to enjoy some great fishing and still be able to get to work that day. Besides all that, there has also been a decent bottom bite for snappers and groupers. We caught a 20 pound black grouper one day followed by a 39.7 pound grouper the next day. All in all, this is a great time to fish.

We have also had three swordfish trips in a row and one of them produced us a monster sword! The first trip was a bit on the rough side and I fished with a client who had caught six swords in one night with me. Unfortunately this time we had 2 or 3 bites but didnt stay connected for long. Our next trip was even slower as we fish with a few guys from South Africa, and unfortunately never got a bite. The radio was pretty slow as well, but we tried almost everything I knew to get a bite, but it was not our night. The third night was the charm. I fished with 3 young guys that were definitely deserving of catching a swordfish. We had rescheduled this trip 3 times due to weather and this night the weather was perfect. I knew the fishing was bit slow and I had warned the guys, but also told them we would work hard at getting them a fish. We set up and within an hour had a very good bite on one of the tip rods, unfortunately we didnt stay connected for long. We were 0 for 1. Hours passed and no more bites. About 10 minutes before lines out, I reeled up the tip rod and dropped it back down and had a bite almost instantly. Unfortunately the squid was cleaned clear off the hook. Not to worry though, because no more than a minute later another rod goes off and we are solidly hooked on a nice fish. We fought this fish for a little over three hours. The sword did long but slow dives down to almost 700 feet and had us to half a spool of line on her first initial run. The first time we winched her up from 700 feet to within 100 foot down and she dove again to close to 700 feet down. We would get her back to 50 feet down and another run, but this time to 500 feet. A few more long dives, each time getting less deep and we finally got her to the top. A quick shot with the harpoon and two more shots with straight gaffs and we had her boatside. Hoisting a fish this big over the gunnels of a boat can be a bit difficult, but my mate Vick is no small boy and along with myself, we had her head over the side. My charter then grabbed us both by the back and pulled us back as well as we finally slid her over. What a beast! My first look had her at 400 pounds. I knew there was a small swordfish tournament out of Fort Lauderdale, so once I got in phone range, I called my buddy Drew and asked him to keep the scale open so I can weigh her. A lot of people can say this fish is that much or weighed approximately X amount, but I wanted the scale to tell us the truth. Drew asked my how long was the fish and I said I cant tell. He inquires why not? And I tell him she doesnt fit in my 34 ft SeaVee without her tail over one gunnel and the bill over the other gunnel. We arrived at Fort Lauderdale and had a small crowd of friends waiting. When we pulled up to the dock, we heard a lot of cheering and amazement. Not only was this fish long, but she was fat. Her measurements were: Lower jaw to fork length of 95 ½ inches, Overall length of 149 inches. She weighed out on the digital certified scale at 413 ½ pounds. What a beast and what a battle. Thankfully this time we won and these memories will not fad anytime soon! Oh, to top it off, at midnight it was my birthday as well That is one great birthday present!