A good time to write up my report as we are locked on land until Tropical Storm/Hurricane Isaac make its way past us. Although just a Tropical Storm right now, it looks like we will get lucky and it will pass us to the south and no damage is expected in Miami at all. The timing is a bit unfortunate as I had two 12 hour swordfish trips planned for Friday and Saturday and lost a trip on the edge today. Thanks to good customers, both sword trips will be rescheduled. I was looking forward to the sword trips as we are getting into the absolute best time of year for daytime and evening swords. Late August through October and even November is the absolute best time to target these fish. Also a friend of mine, just recently caught one of the biggest swordfish caught off of the Florida coast. It was a whopping 760 pounds and in some of the pictures I saw, it almost looked even bigger than that. It took him 3 hours to fight this fish and congrats to a superb catch. I also respooled my reel with the new Sufix 832 braid, so we are ready to go to battle. 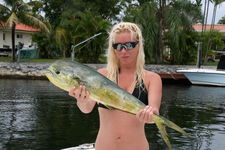 For the past two weeks, we have had great mahi fishing. As I mentioned in my last few reports, the mahi fishing has been very good in August the past few years, and this year, August did not disappoint either. Tie that together with the ability to spot the fish from the tower of the new boat, has made this August even better. I dont know if I can ever own another boat without some sort of tower on it. Thank you SeaVee for building me one heck of a boat. The past two weeks, we caught our limit of mahis on almost all of our trips and the one trip we fell short, it was just by a few fish. The best part of the mahi fishing has been almost all the schools consisted of heavy lifters and a few gaffers up to 20 pounds. It is really a lot of fun when you pull up to a school of mahis and all you see is a whole bunch of neon blue and green fish swimming around the boat devouring everything you throw in front of them. It is even better when the school of fish is composed of all keepers and many fish way above the size limit. Personally, when I pull up to a school of mahis and see that they are of mostly small fish, instead of picking through them and hopefully catching one or two legal fish, I leave that school and look for another school. It doesnt make sense to harass and probably kill most of the school just for one or two legal fish. Since mahis grow so quick, the sub legal fish will be 20 pounders in less than a year.

Besides the really good mahi fishing we also saw a great BIG kingfish run on the edge. For well over a week, we caught at least one 30 pound kingfish and up to 46 pounds on every trip we had. It wasnt like we were catching our limit of all big kings, but we did have at least one stud every day and a few smaller (10 to 20 pound) kings everyday. That coupled with the plentiful bonitos schools definitely kept the rods bent all day.

We are getting into September, and the subtle changes of fall will start being felt. Although it is still hot in South Florida, other places on the East Coast will start to cool down, even if by just a few degrees and this will spark the fish to migrate south. Already stated, we are coming into the best sword months of the year. We also see the best wahoo bite in the fall in Miami. The wahoo fishing in Miami can be very good in late August and September especially around the full moon. Soon after that the wahoo bite in the Bahamas will definitely pick up and it wont be long until we start going to Bimini for some great wahoo fishing. Also with fall approaching we will be putting up the kites and start targeting sailfish again.

I still have quite a few dates open in September. As a matter of fact after this storm passes, the weather is usually great after a storm and the seas are predicted to be flat calm as of Thursday. The fishing, especially swordfishing, can be very good after a storm and that coupled with the upcoming moon; will probably make this week and next prime for some excellent swordfishing. So if you need to get out and hunt that trophy fish, or just want to go out and catch a few fish, give me a call and lets set it up.