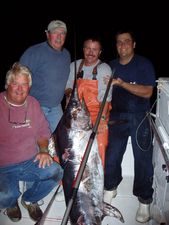 We are getting into the best season of fishing in South Florida. Spring in South Florida offers the best variety of species and we are already seeing some of it.
The new boat is now two months old and is running great. The new Verados already have 300 hours on them and are flawless. Everything is going well and we are catching FISH!

For the past two weeks we have been doing very well. We caught sailfish on every trip we had. It slowed down a tad two weeks ago, but picked right back up with the last cold front we had. We fish the day after the front (Friday Mar 18th) and had a banner day on sails. We ended up catching 10 sailfish out of 14 hookups. All the sailfish were caught on threadfin herring. You know the day is going to be good, when you toss your first bait in the water on a flatline while getting the sea anchor ready, and within minutes you are fighting a sailfish. Our day started like that as we caught more sailfish and the highlight of the day is when we got covered up with sails. The term covered up means that every bait we had out got eaten by a sailfish. We had 6 baits in the water, one bait got picked off, and the other 5 baits got eaten by sails. We had 5 sailfish on at one time and I only had two anglers on board. Calmer than I would have anticipated, some good angling and lots of luck, we landed 4 out of the 5 sails. It was a truly great time.

Besides sailfish, the wrecks are loaded with hard fighting amberjacks. There are also some nice groupers being taken on the wrecks as well. The kingfish are starting to show up. The dolphin have been sporadic, as one day they are here and the next day they are scarce.

We have also had 4 swordfish trips this past week. We started off slow as our first trip we got picked off one bait but didn?t get a solid connection. The next trip was different. My mate Freddy David ran the trip for me as I had been fishing too many days and was out of gas. They did well despite NW 15-20 knot winds and landed 3 out 4 swordfish, and a shark. The largest sword was a very respectable 63 inch (lower jaw to fork length), 130 pounds swordfish. The next night I went out with my other mate Vick and we did very good. We ended up catching 3 out 5 swordfish and had a few more bites as well. Our largest fish was an awesome 80 inch (LJFL), which weighs out to 280 pounds. That fish was truly impressive. We also caught a 100 pounder and an 80 pounder. The next night Vick and I headed out again, hoping that Lady Luck would be with us again, and she surely was. We caught 4 out 5 that night and had other bites as well. Our largest swordfish that night was 73 inch (LJFL) and weighed out at 200 pounds. Our other fish were 130 pounds, 80 pounds and released a smaller one.

I have some trips already booked to the Bahamas, including one this weekend and an 8 day trip to Andros in June. I still have openings for the Bahamas this summer, so if you want red hot bottom fishing, awesome dolphin and marlin fishing at Chub, or whatever other Bahamas package you want, give me a call and let set it up! Also, as I mentioned before, spring may be the best season to fish in South Florida. I have open dates in April and May, so give me a call.