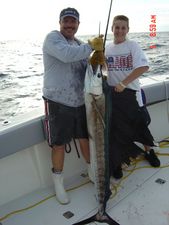 The first report of the year and what a HOT Sailfish bite we have had since Christmas. With sailfish, you usually get one or two boats that catch double digit sailfish in one day, the next day the numbers decrease slightly and by the third day things are back to normal with boats catching anywhere from 1 to 6 or so fish per day. Since the day after Christmas all the way to today, there has been at least one boat catch double-digit sailfish every day. It has been absolutely red-hot sailfish action.

We started off the New Year fishing with two good clients, Jorge and Emilio and ended up catching 12 out 15 sails, the next trip we had clients from out of town and caught 11 out of 14 sails. So in just two days we were in double digits both days. We then had a few days off and went swordfishing two nights. Our next day trip we ended up hooking 5 sailfish. That same evening (different customers) we went swordfishing and caught 1 out 2 swords. That in itself is what South Florida is all about. There are not many places in the continental US or anywhere for that matter that you can catch sailfish by day and swordfish by night.

The weekend then rolled around and another good client, who had caught swordfish with us before, decided to take his two boys out to try for some sailfish. One boy was 12 and the other 16. Well they got more than just a few sails, as we caught 10 out of 15 sailfish that day. So out of 4 sailfish trips this week, we caught double-digit sailfish on 3 of them.

We got out again today and ended up catching 8 out 12 sailfish and almost a dozen dolphin. We actually stopped fishing by 1:00pm because I only had one angler and she was worn out. As a recap to the day though, here is how it went:
We caught plenty of bait this morning and then ran south to go sailfishing. We got to 180 feet in depth, put out the big sea anchor, flew out two kites (5 baits) and a flatline. As soon as we got our spread out (just a few minutes) we had a triple-header of sailfish. Unfortunately we jumped one off then the other two ran together and the lines rubbed and we lost them. A bad way to start going 0 for 3, but we had to get back in the game. This was the third trip in a row that we started off with a tripleheader. A soon as we got the baits back out, we immediately hooked some dolphin. We managed to get the baits out again and got another tripleheader of sailfish going. Better luck this time as we landed 2 out of the 3. We reset again and got bombarded by more dolphin and then we caught a double header of sails. Now we were sitting at 4 sailfish caught out of 8 hooked. By this time we drifted a bit north and the bluer edge looked like it pushed out deeper. We rest out deeper and almost instantly we had all 5 kite lines get hit at once. What actually happened though was we had 4 sailfish on at one time and one of the sails got tangled with the only line which wasn?t hooked up and that?s why it seemed like all 5 lines got hit. One sailfish swam to the boat pretty quick and I got a release on him, then we caught two more, cut the line of the one that was just tangled and we were now successfully fighting the fourth one which turned out to be quite stubborn. After almost 30 minutes we caught the fourth sailfish out of the quad. The reason that last one was so stubborn was that it was foul hooked. To me that was quite a feat. I have caught plenty of quads before, but this quad was caught with only two people on the rods. It was still early, but we were now 8 for 12 on the sails and also had close to a dozen dolphin. The angler was worn out, and we called it a day early.

Certainly days like we have had don?t happen all the time, and sometimes catching one or two sailfish is plenty, but like I have always said, if the opportunities are there, we are going to try to capitalize on them.

I don?t foresee the sailfish action diminishing that much and we have another cold front coming this way in a few days that should keep things going. I have some days left this week and some next week, so if you would like to hopefully experience some great fishing, give me a call and lets get-em.