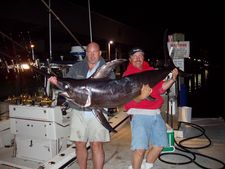 It?s been almost two weeks from the last report, and we have plenty to report on. We have had so many great trips these past few weeks, that it?s hard to highlight all of them. Both the fishing during the day has been great and the evening swordfishing has been awesome. We even managed a few evening tarpon trips when the wind was too much for swordfishing, and they were productive as well.

The sailfishing has been good. Our best day in the past few weeks was this past Monday when we caught 8 sailfish out of 11 hookups. I was fishing with some very good clients and which are now good friends. Besides the sailfish, we also caught a bunch of dolphin. The action was pretty much non-stop. We also had a combo trip yesterday that went very well, again with clients that have fished with me in the past. We had no wind, which can make sailfish tough, so we dropped on some wrecks and caught a mammoth amberjack as well as some barracudas. We then did one drift and caught a sailfish. After the sailfish we headed offshore in search of swordfish and caught 3 out 4 swords by 11:00pm. The combo trips are becoming popular and there are not many places in the world that you can catch a sailfish and a swordfish within a few hours of each other. Two billfish species in one day is quite the feat. During the day, besides the sailfish action, we have had good success with dolphin and also kingfish.

The nighttime has definitely belonged the swordfish these past few weeks. We have had quite a few trips in the last two weeks and have caught our limit of 3 swordfish per night on almost all of our trips. The biggest fish these past few weeks was right around 200 ? 210 lbs. Our best night numbers wise was 5 swordfish. Another night to remember was when another very good client who has been seeking to catch a swordfish on fly, actually hooked one. Wee have tried in the past to get him one on fly and he has had two other occasions when we got swordfish in the light to follow his fly, but this is the first time he actually hooked one. We got a fish in the light and after numerous casts, the sword turned on the fly. I heard the angler yell I?m hooked up and saw the rod bent over. I ran to the console to start the motors and clear some lines, but the hook didn?t stay penetrated and the hook came loose. Talk about excitement though, to actually cast a fly to the most elusive billfish in the world and get him to eat is absolutely phenomenal. Our quest will continue and hopefully the next time may be a world record.

The next few weeks are going to be extremely busy as I am booked almost every day and quite a few nights. Now is the time to start booking the Bahamas trips and trips for the springtime. Spring fishing can be great with sailfish, big kingfish, tunas and dolphin during the day and swordfish and tarpon at night. Give me a call and lets have a great fishing adventure!