We are now getting into fall and soon winter will be here. We had a few close calls with hurricanes and tropical storms but luckily all of them veered to the east and left us entirely unscathed. The same canât be said about our neighbors in the northern Bahamas as they suffered extreme damage. Our hearts go out to them and we will support them any way we can.

The fishing here is now entering our sailfish mode where flying kites with live baits will be the norm. Last weekend we were in Bimini but the boats here saw a big push of early season sailfish. Almost all the boats had multiple shots at sailfish and one boat caught 7 out of 11 bites. That's pretty good action for it being so early in the season, but we have had double digit days in both September and October in the past, so the early sailfish bite can be just as good as the full on winter bite. We will be sailfishing all day tomorrow so hopefully we will have a great report. The good news is we have gone over all sailfish tackle; we have overhauled all the reels, put fresh line on everything, and have live bait already caught, so we will be ready! 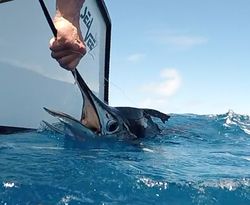 I mentioned that last weekend we went to the Bahamas. We fished for wahoo and did some deep-dropping as well. Typically wahoo season starts on October and goes well into March. Albeit a bit early we did managed to catch a couple of wahoo. We were hi speed trolling and there was a ton of bait around, mostly flying fish. With the amount of bait around and the ability to catch a few wahoo this early in the season would indicate to me that this should be a great year for wahoo. I am attaching a link to a short video I did if our awesome peewee angler Alex, catching a nice wahoo last year in Bimini.
https://www.youtube.com/watch?v=8_5D_onLOfE

There are still some boats chasing mahis around in the Gulfstream and although they are not getting limits of fish, the mahis they are catching are decent in size from heavy lifters (5-7 pounds) to gaffers (10 plus pounds) as well as some fish in the 20 pound range. With the steady push of East and NE wind these mahis are now being caught on the edge while sailfishing so while you are waiting for the next sailfish bite a big bull mahi might come up and eat one of your baits. Good way to catch some dinner!

Swordfishing has also been very good this September and will continue into the winter. Fall is usually the best time of year to target swordfish, but the last few years winter has actually been better than the fall. This year August was great for swords, then Hurricane Dorian came close and the swordfishing completely turned off. A couple of weeks after Dorian the sword bite picked up again and is still good. The bite should stay red hot from now all the way through early winter, which is a good thing because we have 6 sword trips (including some night sword trips) planned for just October.

As you can see from this report, now is the time to book either your sword trips, wahoo trips or trips to the edge. The hurricanes and September already being a slow month really slowed business down but now that the fish have had less pressure on them, its time to go catch them and hopefully catch a fish of a lifetime!