Sailfish are here and we are starting to catch multiples every day now. Although we have had a good summer run of sailfish, it was mostly one or two sailfish a day. Now we are in the season of catching 3 to 5 sailfish on average per day and also with the possibility of releasing double digits on any given day. It sure make is more exciting knowing that after you catch your first sailfish of the day, there is a great possibility of catching more throughout the day. The great sailfish action has also been coupled with a very late run of mahis. The mahis we are now catching on the edge while kite fishing for sailfish have been decent in size, ranging from 5 pounds to 25 pounds. We have had days catching 20 or so mahis per day and have also heard of guys catching 30 to 50 mahis a day. Those numbers are more common in the summer but they are usually much smaller fish (schoolies). So right now while kite fishing on the edge, not only can you catch a trophy billfish, but you can also catch plenty of fish to bring home for dinner. 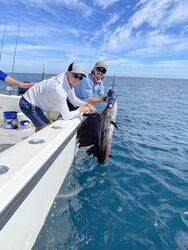 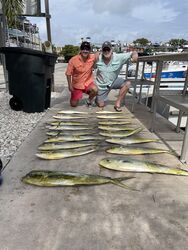 Swordfishing during the day has also been very good. Unfortunately we have missed out on this bite as we have been mostly fishing on the edge. We did have two night sword trips but they were not very successful at all. I canât quite put my finger on it, but although the daytime swordfishing has been good, the night swordfishing has really slowed down. Oner of the trips we had one bite that we missed and the second trip we never had a bite. Both trips we had great drifts, great bait and put in long hours but to no avail. I think we will have to put the night sword trips on the back burner for a while until I hear of some positive reports. Both trips we went on, we only saw one other boat all night.
On the other hand, the daytime sword bite has been very good with a lot of boats coming back with swordfish on almost all the trips. That's good news as we have a few of those trips coming up.

The winter season is here and so is the holiday season. Its never to early to book your winter trip now and also to purchase a gift certificate for a trip on the Double D as a perfect holiday gift. Book it now before the price increase in January.

Hope everyone has a great Thanksgiving!