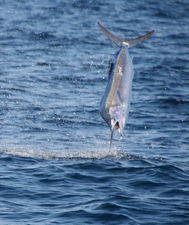 This weekend we fished the 7th Annual Fisher island Tournament and we have fished this tournament every year since its inception. We have basically fished the tournament with the same group of guys and have had a lot of success in the past. We have won it twice and placed 2nd twice and also a 3rd place finish one year. Last year we got 2nd place and this year we wanted to try to get back on top. Tournaments take a bit of preparation and hard work and this one was no different. I had caught bait well in advance and had it penned up and getting hardened. Lots of leaders were made, new line on all reels and the boat maintained and ready. I pre-fished the day before with the group and had a great day. There was no wind at all and had to use helium for the kite but we still caught 4 out 6 sailfish, a big blackfin tuna, several kingfish, a cobia and a mahi. For the conditions it was great fishing and compared to the rest of the fleet we did very well. The next day the conditions had changed drastically. The wind overnight increased and by morning it was blowing a solid 20mph out of the East. We ran to our spot and put out the kites. As we were getting the second kite all the way out, we hooked a sailfish. While we were fighting that sailfish, a rain squall was passing by and the wind went from 20 mph to over 35mph. With the kites in danger of breaking or the kite line snapping, we had to back the boat into the kites to avoid breaking them which meant losing line on the fish off the bow. We eventually got all the kites and gear in and now it was raining quite hard. We chased the fish down and eventually got the release. It was release # 4 of the tournament so other boats also had some quick luck. With it now raining hard, kite fishing was out of the question, so we fished live baits through the riggers and flatlines. We caught another sailfish on one of the flatlines. By now the rain was clearing, but the wind was blowing a solid 25 to 35mph. Sea conditions were definitely getting rough. We set out the 8 hole Bob Lewis kites which do a remarkable job in heavy winds. We continued to catch sailfish and by the end of the day we had caught 15 sailfish out of 25 bites. That was definitely good enough for a 1st Place win. We also won top angler (Andrew Fano) and also top funfish with a big blackfin tuna and a decent mahi. Second place boat had 13 releases and many other boats had double digit releases that day. The competition was a lot of fun and its good to know that a little hard work can pay off. Thanks to my two mates and my group of anglers for making this happen. Id also like to thank SeaVee for making me such a great boat. It was definitely very rough, but the boat handled extremely well and the tower was a great addition to my boat as it kept us on the fish and allowed me to spot tailers, freejumpers and fish coming into the spread.

Sailfishing has definitely gotten a lot better and in the past two weeks we have had at least two other days with double digit releases. The sailfish are also running on the larger side with these spring sailfish averaging 60 pounds and some pushing close to 90 pounds. Besides sailfish we have also starting to catch some of the bigger blackfin tunas. In the past three trips we have caught 4 blackfins tunas from 25 to 35 pounds. These are the tunas we get in the spring and have waited for so long. There have also been a good amount of kingfish around and we have caught our limit of kingfish quite a few times. The mahi bite has been a bit inconsistent but this east wind will definitely push some fish onto the edge. Tarpon fishing in the late afternoons and early evening has paid off as each of our tarpon trips we have caught at least two tarpon. We even had an 11 year old boy catch his two first tarpon with a little bit of help from his dad, Dave Dodich.

Earlier I mentioned the benefit of the tower for sailfishing but it also helps in other types of fishing as well. Just a few days ago, a friend of mine on a sportfisherman fishing north of me, let me know that there was a big leatherback turtle with cobias cruising down the edge. I got in the tower and after looking for a little while spotted the turtle with the cobias on it. We got the baits from the kite right on the turtle and were instantly rewarded with a triple header of 40 to 50 pound cobias. We unfortunately lost two but still managed to catch a nice 40 pounder. I have caught more cobias this year than practically any other year and that is due to the tower. This year mahi fishing will also take on a whole new definition as it will be easier to spot debris and birds and also to stay on top of the school.

Spring is here and the fishing is great so hurry and dont miss out. As for variety of species, April and May are the two best months to fish in Miami. Sailfish, big blackfin tunas, kingfish, mahis, cobias and wahoo are all around.
Summer will come and then it will be mahi fishing, swordfishing and trips to the Bahamas. The trip to Venice Louisiana has been put on hold for this year. In order to charter out of the Gulf of Mexico, you need to limited access federal permits which are difficult and expensive to obtain. This means I am going to put forth a major emphasis to target yellowfin tunas out of NW channel in the Bahamas. It is a very good fishery and pretty reliable. I have already put some trips together.

Now is the time to book your trips for the spring and summer. Whether its fishing on the edge, mahi fishing in the Gulfstream, day or night swordfishing, trips to the Bahamas for muttons snappers, yellowfin tunas and more, give me a shout and lets set it up!