Sails and Swords are Plenty 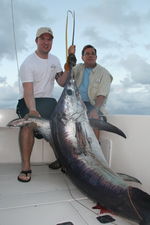 In the past two weeks I have done a split of daytime swordfish trips (6) trips, and trips on the edge (5). We have done extremely well on both types of trips with big swords during the day and good days with sailfish on the edge. Starting with the day sword trips, we have caught at least one and up to 3 swordfish on every trip we have taken these past two weeks. Not only has the swordfishing been consistent, but the fish have been large in size. Most of the fish we caught were between 200 and 280 pounds and only one was below 100 pounds. That is some very good swordfish action. A few of the swords we caught were also bright orange pumpkins. A pumpkin swordfish is a swordfish that has orange meat, much like the color of salmon. This color is believed to be derived from the swordfishes diet although to my knowledge nobody has proven that 100%. The color is different and the taste of a pumpkin swordfish is considered by many as much better than a regular swordfish. Either way, not only do swordfish taste good, but they really fight hard. We fished one day when the seas were quite a bit rough and I dont know if it was the super oxygenated water due to the seas, but that day the swordfish we caught definitely delivered some epic battles. 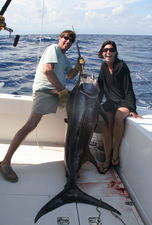 Closer to shore, the sailfish are definitely making there way south. As each cold front approaches, the sailfish follow the bait being pushed down and are now here in our waters. With this being just the beginning of the season, the sailfishing is already good and will get better with each cold front. Our best day this past week we hooked 7 sailfish in one day and with one angler on board, we caught half of them. We also had another very good half day excursion where we caught 6 sailfish on an afternoon trip. Besides sailfish, there has been a very good amount of large gaffer dolphin on the edge, so while you are waiting for the sailfish to bite, the dorados can take up some of the passing time. There have also been an incredible amount of small blackfin and skipjack tuna on the edge. Although most of the smaller tuna wont mess with your larger kite baits, every once and a while a bigger tuna will show up and eat one of the livies . To make matters even better, there have been a few wahoo around as well.

The trips for sailfish season are definitely starting to book and we have more swordfish trips planned as well. November is practically all booked but I still have open dates in December. Both months are excellent for sailfish and swordfish as well as wahoos in the Bahamas. The week between Christmas and New Years is typically a very busy week, so if you are making plans to visit South Florida or have guests coming in, give me a call and lets get a date set aside. Remember, you cant catch them from the couch, so lets go out and get-em.