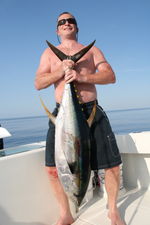 In the past three weeks, I did a trip to Bimini, half a dozen trips on the edge, and a couple of mahi trips in the Gulfstream.
Stating with the edge, there was a surprising number of sailfish around. We had a few days were we caught 4 sailfish in a day and that is rather good considering sailfish season usually ends in late May. Besides sailfish, there were also some kingfish and some bonitas. We only caught a few blackfin tuna and it seems that the blackfin bite has slowed down already. I havent seen much action on the edge with mahis and that is typical this time of year as the majority of the mahis are now out in the Gulfstream. I also did hear of some very nice wahoo caught while fishing on the edge including a 71 pounder. Definitely a nice wahoo and I believe it was caught on 12 pound test!

My trip to Bimini was great. I had a return customer who tuna fished with me in Andros, and he bought a few friends with him. Our trip started with a bit of apprehension. We had high winds and high seas all week due to Tropical Storm Debby and the forecast was not looking great early in the week. After blowing for over 6 days, the wind died down the day before our crossing and we had great weather during the entire trip. We ran across and cleared Customs and then checked in to the Bimini Big Game. After getting our rooms and dock, we ran to the Gingerbreads to catch some big yellowtails. As soon as we put our lines in we caught two flag yellowtails. After that we got sharked on every yellowtail we hooked. They were 200 to 300 pound bull sharks and were not shy of anything. After an hour of shark feeding we headed out into NW channel to look for the yellowfin tuna. The weather was great and made it easy to spot the flocks of birds on the radar and by eye. The first few flocks, we didnt see any tunas busting and we didnt get any tuna bites. Up in the tower looking I spotted a fin cutting across the surface. Going over to investigate, we saw a great big tiger shark. This fish was probably every bit of 600 pounds and showed no fear. We continued hunting for tuna and finally found a flock of birds with a few tuna busting. We set up and started with both live baits and chunk baits. The live baits got hit first followed by the chunks. We didnt catch a bunch of yellowfins, but the ones we did were nice fish in the 50 to 65 pound range. One of the neatest things I saw was when we threw a live bait out and the bait panicked and went down instead of out on the surface. The bait went down probably about 50 feet deep. The water in the Bahamas is crystal clear and you can see the bait swimming when all of a sudden here comes a 50 pound yellowfin, charges right at the bait and suddenly stops a mere few inches stops from the bait. It obviously saw something it didnt like and never ate the bait. It was very cool to watch though. The second day we went back to a different spot in the Gingerbreads and did well with the big flag yellowtails. The third day they had flights to catch so we left early and made the crossing and even had Kristen catch her first fish ever which was a nice 7 or 8 pound mahi.

Mahi fishing here has been OK, we did have one trip we caught our limit of mahis but then yesterday we looked for mahis and never found any, albeit we only mahis fished a few hours. We did catch a sailfish on the troll with a lure which for me was quite cool, considering 99.9% of the sailfish we catch are on live baits while drifting of kite fishing. We also did some drops for swords and had two bites but didnt get tight. There have been some swordfish around including some up to 500 pounds caught just this past week.

I have some trips booked in July, but definitely have quite a few dates still open. This time of year the best bet is going to the Bahamas on a multi day trip or doing a mahi or mahi/swordfish trip. Give me a call and lets set up that trip. Call now and get your $100 discount for the Bahamas.