One of the things I love about fishing in South Florida is the variety of fish we get to target. Since my last report I did daytime swordfish trips, summer mahi trips in the Gulfstream, fishing on the edge for kings, sails, etc. and fished in the Bahamas for yellowfin tuna, mahis, and snappers. That is a whole bunch of different kind of fishing trips.

Lets start with the Bahamas. I was in Bimini for a couple of days and caught some decent fish. The yellowtail snapper fishing was OK but not great. The tide was opposite the wind, which can make that kind of fishing tough. We still managed to catch quite a few snappers and way too many triggerfish. After we had our fill of snappers, I headed out to NW Channel to look for the yellowfin tunas. We found the birds, but the first two flocks didnt produce any fish for us. We did catch a nice mahi though. The third flock had the tunas feeding and we got lucky enough and caught em. The last day we decided to troll around Bimini and within 30 minutes of putting the lures out we had a bite on the long rigger. It seemed like a billfish but I didnt get a clear ID. I quickly reset the lure and put the boat in a turn and a blue marlin came with his bill and head out of the water, side swiping the lure. He hit the lure but unfortunately the hook missed him, but it was still a great sight to see.

I also mentioned fishing for mahis in the Gulfstream. After two or so days early last week, I was about to claim that the great mahi fishing we had this season was finally winding down. We had one day that we only caught 7 mahis on a full day and another day that we didn't find any on a half day and came in on the edge. After that though we had one day were we caught our limit 40 fish and another day we caught 26 mahis and most of them were heavy lifters or gaffers. So, I am hesitant to say the mahi fishing is winding down after have two great trips like that.

Fishing on the edge has also been good. Besides a boatload of bonitos around, there have also been some kingfish and surprisingly enough, there have been quite a few sailfish around. On one half-day trip we must have seen over 15 free jumpers and hooked at least three. The water was blue with a ripping north current. We have hooked sailfish on every single trip on the edge but one. If you want action, the trips on the edge seem like the way to go.

The last type of trip we have done has been daytime swordfishing and I have done 4 trips in the past two weeks. We have had bites on all the trips, but two trips ended up with no fish to the boat. The other two trips did produce and one of the trips is what I would consider an epic trip. Every day seems to be beautifully calm which is perfect for swordfishing and it was flat calm on this trip as well. We made our first drop and within 10 minutes we had our first bite. The fish pulled a bit on the bottom and the line went slack and the fish was swimming up. Usually only the bigger fish can swim up the lead, so we had a pretty good feeling that this was a decent fish. After what seemed like an eternity we pull the lead off the line and see the fish. The only problem is that we see more than one fish. Our fish is in the mid 300 pound range. Next to our fish is a free swimming 500 pounder and next to her are two 100-pound swordfish. We have our hooked swordfish and 3 other swordfish have followed her all the way from the bottom. I can honestly say that that is a sight that I will never forget!! These fish were swimming so close I could practically touch them and they were there for almost 30 minutes. When our fish would peel off line, the others would follow her. As we got our fish closer to the boat, they would be there as well. I could have easily darted them especially the bigger 500 pounder since she showed no fear of the boat, but number one it is illegal to dart a free swimming swordfish and you also dont want to jeopardize losing the fish that you already have hooked, especially since the hooked fish is a decent sized fish. After over 2 hours we finally got the big girl in the boat and it was high fives from everyone. We decided to do another drop and again within 15 minutes we were tight again and this time boated an 80-pound fish. With enough swordfish steaks to feed and army, we headed back home tired and happy.

As you can see, there are a lot of different trips you can plan, but we are coming up to some of the best months for daytime swordfishing. The big push of fish should happen within the next few weeks. Just this past weekend there was a small daytime swordfish tournament (I didnt fish as I was already booked for a trip on the edge). Although there were not a lot of fish caught and some of the very best fisherman never had a bite, the boat that won the tournament won it with a beautiful 501-pound swordfish. Not only are the swordfish typically big this time of year, as mentioned earlier, the amount of bites you get will increase daily and late August through November are typically the peak months. Also coming very soon will be the high speed trolling for wahoo, which usually starts in September. Add action from mahis and good sailfish action on the edge and we have got quite the fishery here in South Florida!! 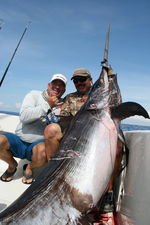