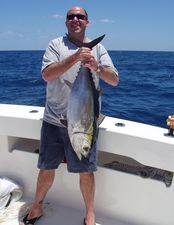 April and May can be two of the best months to fish in South Florida. Although we have seen glimpses of that for the past two weeks, the full effect of spring is yet to come. We have had some very good days fishing and some slow ones (this past weekend) as well.

The sailfish are still around in good numbers and we have caught sailfish on every trip but one for two weeks. The best day we caught 5 out 5 sails. There was a day last week (Thursday) that a few boats had over 10 sailfish. Wouldn?t you know it that was my only day off last week. Not to sulk though, as this has been my best sailfish season. There have been many days that we went into double digits this year.

I had mentioned that we have had glimpses of spring fishing and last Wednesday was that. We caught 18 kingfish and every kingfish but one was over 10 pounds. The biggest kingfish was 32 pounds and the majority of them were 20 pounds. Besides the kings, we also caught sailfish. At one point during that trip, it wouldn?t take longer than 10 seconds after you threw out a live bait to get nailed by a big king. The action was about as fast and furious as I have seen all year. We didn?t catch a tuna that day, but we did on our next trip. Most of the tunas we have caught this year have been from 150 ft in depth to 200 ft. That is a bit deeper than normal, but then again most of the sailfish caught this year have been deeper than usual as well.

We have caught some dolphin these past two weeks, but that has been the biggest disappointment this spring. With the winds coming out of the southeast this weekend, the dolphin fishing should have been real good, but it wasn?t. Hopefully the dolphin fishing will pick up like it should.

Besides live baiting on the edge, there have been plenty of bruiser amberjacks on the wrecks. If you want some real rod bending action, AJ fishing is it.

We went swordfishing a few times since the last report and we have been lucky to have caught at least two fish every trip. One trip, we didn?t have one bite all night, and then about 10 minutes before we were ready to leave, we scored on a doubleheader of swords. The next trip, we got a bite even with the sun up. Instead of a swordfish though, it was a big mako shark. He ate the front tip rod, came right up to show himself, and then dove 300 yards straight down. After 40 minutes of pumping him all the way back up, 30 feet from the leader he chewed through. It was his lucky day, as we had the ?Poon? harpoon ready and the flying gaff and straight gaffs were ready too. We did end up catching 2 swordfish that night, including one of about 150 pounds.

All in all, the fishing has been good, and I predict it is going to get better real soon. Maybe instead of April and May, this year it will be May and June. Either way, were ready for them.