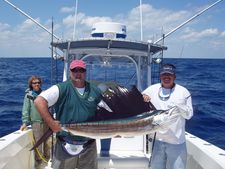 The fishing slowed down a bit this week, but that was due to the lack of wind and lack of current. Springtime is usually one of the best times to fish in South Florida, and I?m sure as soon as the current and wind get going, the fishing will be on fire just like it was last week. We had one day last week that the catching was non-stop and just a spring should deliver; we caught a variety of different species. We caught 18 dolphin up to 35 pounds, a few kings, including one that hit the scales at 37 pounds. We also caught 8 out of 9 sailfish and a bunch of bonitas. The guys fishing the shallow water looking for rays were catching cobias as well. As spring gets into gear, we should expect to see that kind of variety of fish as well as some blackfin tunas in the mix. The fishing on the wrecks has also started to show a few more amberjacks, and if anyone wants to feel the fight of a backbreaking fish, try some jack fishing on the wrecks.

The nighttime fishing has also been producing. The tarpon fishing has been red hot. We went out one night and although we seemed to have the skunk on the boat, we saw other boats hook and catch as many as 8 fish in one night. The bite has been at Government Cut and shrimp has been the bait of choice, although some fish are already being caught on crabs. The night swordfishing has been good as well. Since the last report, we went out twice and caught fish on both nights. The last night we went out (Monday night) we had an insane amount of bites had three fish pulling drag and caught and released a 100 pounder. Although we didn?t land a bunch of fish, it was non-stop action on a beautiful calm night with a great client on board.

The next few months, the action on the edge as well as the nighttime action for swords and tarpon should be about as good as it gets. We have quite a few sword trips booked as well as day trips. One trip that we are starting to offer this time of year is an afternoon/evening trip as well as a late afternoon trip. We can start our trips at noon and fish all the way to dark (~8:00pm these days) or we can fish from 4:00pm to dark. The action is usually very good, as the light level gets lower. Some of the best blackfin tuna action doesn?t even begin until 4:00pm. We are also starting to approach our Bahama season so give me a call and lets set up those trips.