Spring fishing is here. The sailfish have made their way down to Miami and are sticking around. Almost every day this past week we have had 4 or 5 sailfish releases and have seen up to a dozen sailfish per day. Also very encouraging, is the number of multiples we have had. When the sailfish are coming through in good numbers it is very common to hook 3, 4, 5 and even 6 sailfish at one time. Its controlled chaos if everyone follows the captains and matesâ instructions. From my vantage point in the tower, it is easy to see which lines are going to cross and all my anglers usually do a great job. I am proud to say that when we hook multiples, we lose very few fish. Occasionally, you get a sailfish to do something unexpected, but we are usually on top of it.
The sailfish bite should continue to stay at this level if not even improve well into the beginning of May. 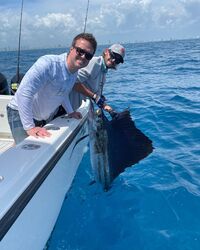 We have also started to see a few of the bigger blackfin tunas. These fish will increase in numbers and size every week from now into the end of May and beginning of June. Last year, May was nothing short of excellent for the bigger blackfin tunas. We have also seen and heard of a few yellowfins this past month. These are not the 30-to-80-pound yellowfin tunas we find in the Bahamas but are 125-to-180-pound brutes. Just two weeks ago we hooked a huge yellowfin tuna. We were kitefishing and saw a small splash on the left long kite bait. We had already caught 3 sailfish and figured this was another sailfish. We fed the fish the bait and it ran on the surface just like a sailfish would. Then it took a steady run going deeper which sailfish also do. We figured it was another sail, so we stood still and let the fish scope up on its own. It did and then we started chasing it down with the angler up on the bow. Then to everyoneâs surprise, we could all clearly see the super long sickle fins of a yellowfin tuna as this tuna started racing on the top. At one point it was swimming in the swell with its sickle fin slicing the water like a submarineâs periscope. I wish I had it on video as it was one of the wildest things I have seen while fishing. We had the right angler on the rod as this guy has caught countless of giant bluefins up north. With that said though, fishing only 20-pound line and 30-pound leader, the leader finally wore through and bye bye yellowfin. We didn't get it but got to see something very special. 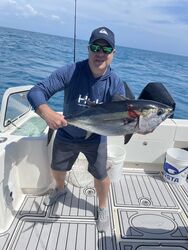 So, besides sailfish and tunas, spring also brings bigger kingfish and more mahis on the edge. All very good things. Only downside is that I only have two open dates left in April out of the rest of the month, and May is already over half booked as well. Don't wait till the last minute, book now and grab one of those open dates. Iâm excited about spring fishing in Miami and so should you!