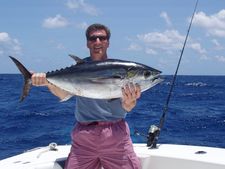 The fishing for the most part has been very, very, good. There have been plenty of sailfish around, and plenty of kingfish as well. Starting with the sails, we have caught sailfish on every trip for the past two weeks and had some outstanding days on the sails as well. Our best day was 10 sailfish releases out of 12 hookups, followed by 8 sailfish out of 12 hookups. We had plenty of days where we caught 4 to 6 sailfish per day. It may seem like it is late in the season, but when the conditions are right, the sailfish will cooperate. Most of the past two weeks, we have had good clean blue water with north current. Those two being the most important factors, have kept sailfishing going strong.

Besides the sails, there are plenty of kings around and some decent size ones as well. The majority of the kings though seem to be from Boca to Jupiter. Many of the commercial king boats have moved up north a bit and are catching quite a few kings.

Another spring favorite making its way to our waters is the blackfin tuna. Instead of hearing one or two tunas caught each day, we are now hearing of quite a few blackfins caught every day, including a fat 35 pounder we caught on Friday. It ate the long goggle eye on the kite.

Not to be out5done by the day fishing, swordfishing has been decent as well. We went twice from the last report and had connection with swords every trip. Our best night we had 7 bites, 5 fish pulling drag and caught a decent one after a battle that lasted 1 hour and 15 minutes. We have a few more trips scheduled soon, so I?ll have a good report next time.

That being said, I have fished practically every day and actually only have one open day until May 30th. I have two Bimini trips scheduled in the next two weeks, so I?ll have an update on the fishing there as well. With May filling up so quick, June is starting to run out of open dates as well. Call me up and lets set up that trip, whether it fishing in the Bahamas, swordfishing at night, or day fishing for kings, sails, tunas and dolphin.