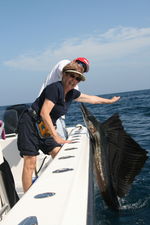 I have been on the water every single day since my last report and have had some great trips. To start, we have caught a sailfish on every single trip since my last report and have caught a sailfish on every single trip this year. That is some pretty consistent sailfishing. We are still averaging 5 to 7 shots a day which is still very good. We did have a couple of days of double digits and had one great day where we had 21 shots in one day. The sailfish are moving through in small pods and singles, doubles and triples are the norm. We have had a few quads (4 on at one time) but those have not been as prevalent as earlier in the year. That can change really fast and for the last few years we have seen some great sailfishing in the spring.

Normally in April and May we start to also see more variety in the fish that we catch, and lately it seems that spring may have started early since we have been catching other fish besides sailfish. There have been some kingfish around and we have caught at least two big smoker kings (over 30 pounds) since the last report. There have not been as many dorados around as I would have thought, but the ones that are being caught are decent schoolie size and bigger. The one fish there has not been a shortage of lately are bonitos. When the sailfish bite is going off, bonitos can be a nuisance, but they do fight hard and definitely test your tackle and skills. There have also been a few wahoo around including a 30 pounder we caught a week and a half ago. We have also had reasonable success on the bottom, catching a few very nice mutton snappers and releasing some decent size groupers as well (groupers are out of season).

I also did my first tarpon trip of the year and had a great evening releasing 3 out of 4 tarpon that night. The first one we caught was a big fish over 100 pounds and the last two fish were a doubleheader of 60 and 80 pounds. It was a lot of fun with a great group of guys that had booked me for 4 days straight. In those four days we caught those three tarpon, lots of sailfish, a big kingfish, dorado, snapper, grouper, and no shortage of bonitos.

I also did my first swordfish trip of this year. It was a day sword trip and we did catch one swordfish right at 100 pounds. We also had another strike that we missed. The sword bite from what I have heard was slow in January and starting to pick up again in February. There have been some big swords caught in the last week, so hopefully the bite gets better and stays all the way through till the fall. 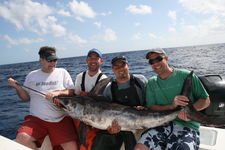 We have more day and evening sword trips booked this month and also have a lot of sailfish trips booked. The first party of March is pretty booked, but I do have opening mid March and later. For the first time in a while, I also have some open weekends dates open. Now is the time to book your trips and enjoy some great fishing.