Sorry for the delay between reports but it has been a very busy couple of weeks. We had a sailfish tournament in Palm Beach, then I went to Casa Vieja in Guatemala for some Pacific sailfish action and as soon as I got back I had non-stop trips.
Starting with the Palm Beach tournament, it was Operation Sailfish based out of Sailfish Marina in Palm Beach and is the first leg of four of the Quest for the Crest Series. We did well in this tournament in the past and were hoping to do well again. The first day of the tournament we fished south by Boynton Inlet and we were lucky enough to catch 8 sailfish out of 8 bites. That was god enough to place us into third place and also won us some money in the daily Calcutta. The second day we started in the same area, but the bite slowed down. We missed a fish early but had no action for a while. We moved up a few miles and got a triple-header and also lost a fish. It slowed down again but we started to hear of a bite going on up north. The wind started to blow and it was going to be a rough ride, but we were in contention and had to make the move. After an hour of running and only an hour and a half left in the tourney, we got up north and were greeted with purple water, north current and bait everywhere. We quickly caught a fish as soon as we set up. We then saw a free jumper and position our baits to intercept his path and were greeted with a triple-header of which we landed two and lost one. By now tournament time was running out but we finished strong in third place and won money as well. There were a total of 54 of the best sailfishing teams in the tournament so I was extremely happy with our team. Our total for the two days was 14 sailfish releases out of 17 hookups.

A couple of days after the tourney, 4 of us from the tournament team headed down to Casa Vieja in Guatemala to do some Pacific sailfishing. We had won this trip from The Billfish Foundation and Costa Sunglasses. I like to start by saying Casa Vieja is a world-class resort with meticulous service, great food and great hospitality. The staff was extremely friendly. The fishing was also great and our crew was Capt. Chris Sheeder and two of his mates on the boat Rum Line. Capt. Chris is one of the best and is a great person. We caught 12 sailfish the first day, 19, the second day and 8 the third day. We also had a blue marlin in the spread on day one but no bites. It was an awesome couple of days and something I will never forget.

Once back to the states it has been non-stop fishing. Luckily the fishing has been very good. We caught sailfish every day including one day where we were 8 for 8 on the sails. We even caught sailfish in 40 feet of water sight casting to them while they were spraying ballyhoo on the reef. Besides the sailfish there have been a surprising number of blackfin tunas including some pushing 30 pounds and quite a few big mahis as well. If you stay in shallower, there have also been a lot of big smoker kingfish. Our biggest king this week was pushing 40 pounds. So as you can see, the winter fishing is in high gear and the fishing is awesome.

I don't have any days left between Christmas and New Years and January is about 70% full already, But what that means is there are still days left so go ahead and give me a call and lets take advantage of the great winter fishing.
I hope everyone enjoys the Holidays and has a Safe and Happy New Year! 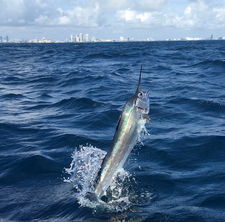