Summer is almost gone and kids will be heading back to school very soon. We did get to go back to Bimini one more time this month and although the weather was a bit windy on the way across and windy the first day, the new 37 SeaVee just slices right through that stuff. We mostly went deep dropping and did very well. We caught a bunch of queen snappers, which in my opinion is one of the best tasting snappers around. We also caught mystic grouper, yellow eye snappers, wenchmen and a few green-eyed sharks. We also did some yellowtail snapper fishing which was also pretty good. The sharks did move in on us after and it soon became close to impossible to reel in a snapper before the sharks ate it. With that coming in to play we rigged up and caught sharks as well. 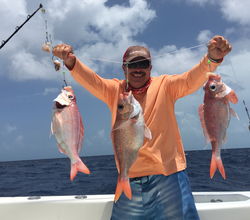 The fishing back home has been pretty good. As a matter of fact, as I am typing this report Capt. Freddy is running the Double D today and in just the first two hours of fishing the charter has already caught a nice wahoo, a blackfin tuna, and a load of bonitos. A lot of the fishing right now is done by trolling surface baits and trolling deep baits. Being that it is August the water is pretty hot and a lot of your bites are coming on the deep trolled baits. We have also been fishing live baits on flatlines, deep lines and kite baits and August has been a pretty good month for sailfish as we are getting one or two shots a day on average. Mahi fishing continues to be slow and I think the fleet has pretty much given up on them, especially since there are so many fish on the edge like wahoo, tunas and kings.

Swordfishing continues to be good although we did have a one-week period that all the boats were complaining that it was slow. That being said though, End of August through November are usually the absolute best months to target daytime swords and that is good since we already have a dozen or so trips booked in September and October.

With August almost halfway gone we are going to see a change in the weather here pretty soon. Once we get into September, the temperatures will dropped every so slightly but you can definitely feel the difference especially in the early morning. More importantly that temperature change will be more drastic up to the north and that in turn will drive huge schools of baitfish southward. You know what happens when the bait comes south, the predators like sailfish, kingfish, tarpon etc. will be right on there heels, and we will be right in line to catch them.

So if you ever wanted to tangle with a broadbill swordfish or simply want plenty f action on the edge, now is the time to call and set up that trip!