Summer Is Just Around The Corner

Spring is here and summer is just around the corner. Spring fishing has still been pretty good with quite a few blackfin tunas, big kings, some sailfish and some mahis. When the weather has been calm we have been able to hed out into the Gulfstream and look for schools of mahis and that has gone fairly well. We have mostly been looking for them while on our way to and back from the sword grounds. The mahis have mostly been schoolie fish averaging 3 to 5 pounds although there have been some bigger 20 to 30 pound mahis being caught. I mentioned swordfish and we have done 4 daytime trips since the last report. We have had multiple bites on all out trips and in the last 4 trips have had 11 bites and caught 3 fish. Getting the bites is probably the most important part but I have to do a bit better in converting the bites into hooked fish. A lot of it seems to be small fish just whacking at the baits. Most of the swordfish caught by the fleet in the past few weeks have been small but there are always big fish mixed in and I know of at least two fish over 400 pounds caught in the past few weeks. Two of the three fish we caught and released were small fish less than 100 pounds and the third fish also released was about 200 pounds. Swordfish, unlike other billfish are known for there great table fare and a lot of people will question why did we release a 200 pound swordfish, but that is up to the charter and if they say let it go, we will let it go. Other billfish such as sailfish and marlin are all released on my boat.

Sailfish season is definitely winding down but we still had one day last week that we caught 6 out 7 sailfish and most of our full day trips have resulted in at least 1 sailfish per day. Although sailfishing is winding down, the blackfin tunas are taking their place and that's fine by me as a big blackfin can put up quite the fight on light tackle.

We are set to go to Bimini this weekend for the mutton snappers and once I get back I am taking a 39 SeaVee with IPS drives to San Salvador in the Bahamas for a few weeks of marlin fishing. I have done this trip now for the past three years and am really looking forward to it. I get to fish with a great owner and friend as well as catch some great fish in the Bahamas. Its hard to beat that!!

Ill be gone most of June but do have a few openings at the end of June and have plenty of openings in July. Now is the time to plan on catching that monster sword, chasing mahis in the Gulfstream or heading to the Bahamas for big yellowfin tunas, deep dropping and bottom fishing for snappers and groupers. Whatever tweaks your interest, give me a call and lets go catch some fish!! 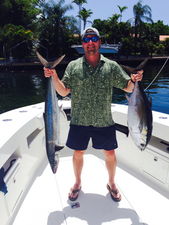