The mahi fishing off of Miami last week was absolutely great. There was a ton of Sargasso weed out there and in nice long lines. All you had to do was troll down the line or look from the tower until you spotted the schools of mahis. Not only were there quite a few schools, but most of the fish were either gaffers or heavy lifters (5 to 15 pounds) and occasionally you would find a 20 to 30 pound mahi as well. What we failed to find though was any other type of debris and so we really didnt have the opportunity to find wahoo, which are normally found under debris like wood, etc. The seas were extremely calm which made the fishing even more fun. That was last week and this week everything changed. The wind came out of the west and SW and although it wasnt rough, there was enough chop that it broke apart the weedlines and made the mahi fishing extremely difficult. Instead of being able to troll or look around weedlines, you basically either blind trolled or ran around looking for birds. The only mahis I heard being caught were on birds about 20 to 25 miles offshore.

The only saving grace to the lack of mahis was that we came in on the edge and found decent looking water and some north current and luckily some sailfish as well. Catching sailfish in the summer is not unheard of, but they are a winter and spring fish for us. When you catch a sailfish in the summer it is definitely an added bonus and when you catch two in one day its even better and that's what we did on two of our trips this past week. The sails were caught with either live pilchards or live threadfin herring and most of the bites were in 120 to 130 feet of water. Hopefully they will stick around and we can catch some more.

I also did a combo day/night sword trip and we had great conditions for both parts of the trip; unfortunately the swordfish do not cooperate. During the day portion we had one fish hit the bait about 15 times but unfortunately the hook never stuck. At night we had a great looking spread out of 5 rods with both live and dead baits. The only bite we had was on the long jug and at first it really started acting like as swordfish but as we got it next to the boat it turned out to be a 150-pound night shark. Its not what we were hoping for but at least the angler got to battle something fairly big.

Tomorrow Im heading for the Bahamas, specifically Grand Cay and Walkers Cay. There we plan on doing some bottom fishing, deep dropping and some trolling for marlin. After the Bahamas I have some more mahis trips scheduled, which Im sure the mahis will be back, the temporary lapse was due to the west winds. I also have some swordfish trips on the books which by the way we are almost in our absolute peak season for swordfish which is September, October and November so if catching one of these beasts is on your bucket list, hurry up and reserve your dates during peak season before the calendar fills up. 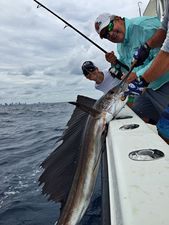