Are You Sure It Is August?

August is often one of the slowest months of the year for fishing in South Florida. Well somebody must have forgot to tell the fish, because right now the fishing is awesome!! To start, we are seeing a lot of bait along the beaches and some in the bay and have seen a lot of bait offshore as well. Most of the trip I have done have been fishing on the edge and that has been phenomenal. In my last report I stated that there were a surprising amount of sailfish around and they are still around. We have managed to catch a sailfish on all of our trips but one while fishing on the edge. You can catch a sailfish on any given day in South Florida, but it is a bit uncommon to have so many of them around for the past three weeks. Its definitely a good thing and hopefully a sign of a great winter sailfish season. Typical this time of year is to have a lot of bonitos around and they have not been letting us down. They are hard fighting fish especially on light tackle. The bonitos have been eating the live baits pretty good but if you really want to catch a bunch of them, troll a planer with a spoon at the end and you will catch so many bonitos your arm will be sore for quite some time.

Besides the sailfish and bonitos, August, especially around the full moon is a good time to catch a wahoo. In the past three trips we caught two wahoos and both were between 30 and 40 pounds. You can definitely know you have a good fish on since when a wahoo first takes the bait you get a blistering run, especially on 20 pound tackle. Not only do they fight well, but it happens to be my favorite fish to eat as well. Besides August, September is also a great month for wahoo in South Florida. Another surprise this month is the amount of kingfish and some truly big kingfish as well. Our best season for big kings is in the spring but again the past two weeks we have caught kings on every trip and most are between 20 and 40 pounds. That is another fish that can make a first blistering run.

As good as the fishing has been on the edge, I had a good customer a few days ago that wanted to go after mahis instead of staying on the edge. I tried to convince him to stay on the edge since the fishing was so good. Also, there have only been a few spotty reports of mahis offshore. Either way, we went out to hunt for mahis and quickly found them but they were very small. We saw a few schools of 20 to 50 fish per school but only managed 2 keepers. Once we get into a school and the majority of them are small, we leave the school alone and go find another school of hopefully bigger ones. It was a ¾ day trip and our time was coming to an end when we found another school. All of them were not only keepers but either gaffers or heavy lifters. The school wasnt huge and had about 20 fish in it, but that didnt matter since they were all around 10 pounds or more. We quickly caught a dozen or so and then the rest took off. It was a good way to end the day.

With August almost gone we will soon be in the heart of daytime swordfishing season. September, October and November are the three best months and if we get an early start, as it has been on the edge, this September could be awesome. Wahoo season on the Bahamas will also start in a few weeks so I am ready for that as well. So whether it is swords, wahoo, mahis, sailfish, kings, let me know what you want to target and lets set up that trip!! 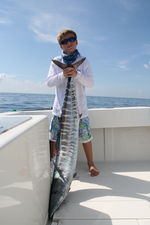