Sword Bite is ON!

The day sword bite is definitely on! Since my last report I have fished every single day with the exception of 2 days. The vast majority of the trips have been swordfish trips, mostly daytime, some nighttime and also some combo trips. I have also done a few trips on the edge. Well the daytime bite has been very good. We caught swordfish on every single one of our trips with the exception of one trip that we got bombarded by rain and thunderstorms. But even that was OK as we had the same client the next day and the weather improved and we ended up catching 4 daytime swordfish in one day. He was so ecstatic and booked 3 more trips for next month. We have actually had quiet a few trips with 3 or better swordfish per trip and our best day was 5 swordfish. The fish have been on the smaller side and we have released the majority of our daytime fish. I have tagged at least 6 swordfish in the past week or so and released more than that. There are still some big fish around. We have had some fish close to 250 pounds and have heard of a few fish over 400 pounds being caught. Since my last report, every angler on board has manually cranked on every single one of the swordfish caught. Believe it or not, we actually had a 7 year old boy from South Carolina crank on a swordfish, and although he did have some help from his dad, he actually fought the fish the majority of the time. Now that is quite the achievement for a little boy. The evening bite has been pretty good as well. We caught three swordfish last night and also a Cuban night shark, but we also had one trip that we didnt even hook a swordfish. Every night can be different. On one of our combo trips, we fished with Mathew from England and caught a few daytime swords during the day. As we switched over to do the night set, we were letting out our first bait on a jug, when the jug stopped sliding out and the next thing we saw was the LP light racing on the surface followed by a few spectacular jumps from a 200 pound plus broadbill. Mind you, that this happened while the sun was still out and it was just starting to get a bit darker. It was quite the scene. We ended up pulling the hook on that fish after 20 minutes or so, but that was OK too, since we caught 3 more swordfish that night.

Besides swordfish, we also had a great fall run of bigger mahis in the Gulfstream. The mahi were plentiful and decent size from 5 all the way up to 30 plus pounds. Our biggest dolphin weighed in at 36 pounds. We usually caught the mahis while we were running back and forth from the sword grounds. The mahi bite will definitely slow down in the Gulfstream but soon more mahis will get pushed in to the edge. 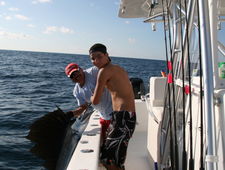 Fishing on the edge has been up and down. We did have a trip that we caught 5 sailfish in one day, but also had a trip where we didnt even see one. This will definitely improve and the first forecasted cold front of the season is expected this weekend. Besides a few sailfish, there have been some kingfish, muttons and amberjacks.

The new boat and electronics continue to amaze me and this girl has definitely had some great luck already. Look at your calendars and book your winter trips soon. I already have a fair amount of bookings for December and January, and October and November are starting to fill in. I also heard of a few wahoo being caught over in Bimini, so now is the time to book those trips as well.