The good news is that the daytime sword bite is still on fire. We have caught at least one and mostly 2 to 4 swordfish on every single one of our trips. It has been very consistent and most of the fish we have been catching have been by hand cranking all the way from the bottom. We have caught swordfish from 30 pounds up to about 200 pounds. We have also tagged and released quite a few swordfish these past two weeks. For the most part the fish have been a bit on the smaller size but there have been a few fish over 500 pounds caught by the fleet. We even helped another vessel boat a 520 pounder. Last week we had one customer from North Carolina who fished with us for three days and his intentions were to catch at least one swordfish and knock it off his bucket list. We did a bit better than that and he ended up catching 8 swordfish. I really dont like to keep track, but we are having an incredible streak going with one or more swordfish per daytime trip. It has been truly red hot! 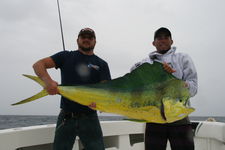 Besides the swords, there are still some nice dorado offshore and with the wind picking up the past few days, the dorado have also pushed in to the edge. We caught a very respectable bull dolphin today on the edge which tipped the scales at over 40 pounds. While fishing on the edge, the sailfish bite has also been very good. Our best day we caught 5 sailfish and have had other days with 3 and 4 sailfish a day. We didnt catch any sailfish today but the big mahi and several other mahis made up for it. There have also been some kingfish caught as well as some snappers and groupers.

Although I havent made any trips to Bimini yet on the new boat, several boats have gone over and done very well with the wahoo. This is definitely the time for winter wahoo fishing in the Bahamas and I am eager to get over there and do some high speed trolling for them.

The calendar is getting pretty full and the rest of October is pretty much booked up. I am already getting trips booked for the winter sailfish season, but still have plenty of dates left. Now with the new boat with the tower, I am looking for charters to fish some of the sailfish tournaments this year. The tower is a huge advantage and the speed and maneuverability of a center console is tremendous. If you are interested in possibly putting together a tournament crew, give me a call and we can discuss the details, or if you just want to have a fun day of fishing call now and lets get those trips booked in advance.