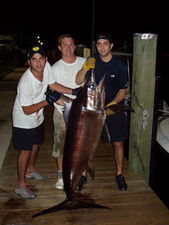 For those that follow my reports, you know it has been a while since my last swordfish report. Ive been in the Bahamas for most of June and some of July, I also went on vacation for a week, and the rain and lightning has cancelled our recent trips. Well this Tuesday it looked like everything was going good. The weather was perfect without a drop of rain or storms in sight. I was hoping for a good night since the recent reports have been a bit spotty with many boats coming back empty-handed. All my gear was ready, we had a bunch of live and dead baits and off we charged to the sword grounds. I had great customers, Kurt with his girlfriend Peggy, and we were anxious to get started. As night fell, we had a beautiful evening with clear skies, lots of starts and a nice light breeze. The night started a bit slow, but we saw some shooters (shooting stars) watched a satellite zip through the sky and at 10:15 or so we got some action on one of the rods but missed him. We quickly put out another bait and as I was letting it out, the jug pulled off and we had our first fish on. My angler got on him and a short time later we boated our first sword. Another hour goes by, but now everyone is excited as we got our angler his first sword. We were working on the back tip rod, when we saw the light from the front tip rod streaking across the surface and under the bow. My angler got on it and we were now battling our second fish which turned out to be a decent 100 pounder. Now we were officially 2 for 2 and since it was just past midnight we decided that it was a great evening and we should head back. As we were reeling our lines in, we hooked another sword that we caught and released. We were now 3 for 3 and might happy!

Thursday night, we had another trip. This time we had Gabriel and one of his friends. Gabriel had just gone out a few nights ago on another boat and didnt have any success, so we were hoping to keep our luck going. Again, we had a great night with clear skies, with just a little bit more wind though. About an hour after dark, our front tip rod gets hit and Gabriel is on it quick. After a few minutes, from the fight, I didnt think it was a sword and after 15 minutes Gabriel gets the leader on a big Cuban Night shark of at least 150 pounds. Although it wasnt a sword, Gabriel was still happy since it was his biggest fish to date and the night was going better than it did a few nights back. We set everything back out but had no action for quite a while. The clock was ticking and I was hoping that we could get Gabriel his first swordfish. Almost time to go, the front tip got hit and Gabriel is on a real nice fish. As he is fighting the fish, the middle jug goes and now we have a doubleheader. We got Gabriels fish to the boat and it is one of the fattest swords I have seen. It taped out a 72 inches (lower jaw to fork, 50 inch girth and 103 inches overall). The fish was a solid 225 pounds. A short while later we got the second fish to the boat and Gabriels buddy got his first sword as well. His sword was 51 inches (LJFL). We had a great night that ended perfectly and everyone was ecstatic.

I have quite a few more sword trips coming up, but have some open dates for next week. Give me a call and lets keep Lady Luck rolling!