Even though we are still plagued with green water and little or no current, the fishing still remains good, as long as you are willing to venture outside the box. Typical depths for fishing on the edge with kites targeting sailfish, mahi, kings etc. is usually from 100 to 200 feet in depth. The only problem is that we have continued to have green water and little current in that zone. We have been venturing a bit farther offshore and anywhere from 300 to 500 ft we have usually found a bit of a color change with some north current as well. Once you fine the color change, it doesnt take long for the mahis to find you. We have been targeting the mahis by either putting out the kites and the live baits along the edge, or jumping on the tower and cruising down the edge looking for them when the weather has been decent. Both ways have worked well and there have been plenty of mahis to be caught. In those same depths, we have caught sailfish. We have caught sailfish on every one of our trips with the exception of one day and that was a half day trip with lots of rain which made flying kites a bit difficult. If you dont want to venture as far offshore, there have been a lot of mackerel along the beach and that can be a blast on light tackle especially with kids on board that want constant action. 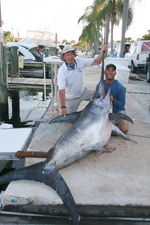 Although it still has been a bit windy, we have had a few days where the weather cooperated and we went daytime swordfishing. Both of our trips we caught swordfish and one of them produced a real monster of the deep. That fish was caught by 3 guys from London that came to the US to fish in the Keys for a week or so and then to Miami to try the new daytime broadbill fishing. On our first drop we didnt get a bite, but the second drop we caught a 60 pound swordfish that was caught by David West. This was his first broadbill and was plenty excited about the catch. Although way above the legal size, we all agreed to release it to grow bigger and fight another day. Our next few drops did not produce any bites and reports from the radio were the same. Out of the fleet there were only two fish caught and luckily one was ours. I picked up and ran farther south and decided I would spend the rest of the day there. On our first drop, I marked a swordfish on the bottom with my new Simrad depth recorder. Some may be skeptical about that, but this is at least the 5th time I have marked a fish on the bottom and caught it. All I have to say is that the new CHIRP technology is very impressive. Once I saw the mark and it was a fairly large mark, we dropped the bait back to the bottom and within a minute we were getting bit, but no hookup. I thought the fish lost interest, but a minute or so later the rod started to load up and the fish was on. Clive was now on the rod and the fish fought pretty hard on the bottom, but eventually started to rise. Usually fish over 200 pounds can swim the lead up and the rod tip basically goes slack. The smaller fish arent as strong and cant lift the lead so they end up fighting the whole way. This fish did a little of both so in my mind I thought we had a 150 to 200 pound fish on. Once we got the lead off the line the fish surfaced showing us her dorsal fin first followed by her tail fin. There was a good separation between the fins and I knew we had a very big fish on. She stood there for what seemed like an eternity with both fins completely out of the water. From my experience only the truly big girls do that. She then charged the boat. We had a shot with the dart but missed and then she tried to dive under the boat and into the props. I put the boat in reverse and spun away from here and got her off to my bow where she proceeded to jump completely in the air. What a sight!
She then dug back to towards the bottom and we played, see-saw with her from 500 feet to the surface We fought her for another 45 minutes up and down until she decided to swim up again and started swimming on the surface. I had both engines in gear in reverse going hard but line was just emptying from the reel. At some point she got wiped out because we started to gain line slowly but surely as she stayed on the top. Next to the boat she was pretty much done and we sank two gaffs in her. The hard part now was to get her inside the boat. We struggled for quite a while but eventually with a lot of adrenaline and perseverance, we got her on board. Once on board we could definitely see that she was a big girl and although not as long as some of the bigger fish I caught she had a tremendous girth of 68. She was definitely the fattest swordfish I had every seen. The girth times length formula put her at 531 pounds, although I would venture to say she was somewhere between 480 and 520 pounds. With the big girl on board we headed back to the dock with some very happy customers.

The holidays are quickly approaching and now is the time to book your trips. If you have family coming to town during the holidays, lets take them out fishing and have a good time. Also, if you have that special someone in your life and simply dont know what to get them, we offer gift certificates for all kinds of fishing trips.

In the pat few days, the current started running again and the edge was pushing in. With the wind coming out of the east it should blow that edge in and we should start seeing phenomenal sailfish action again. Give me a call and lets set up that trip.